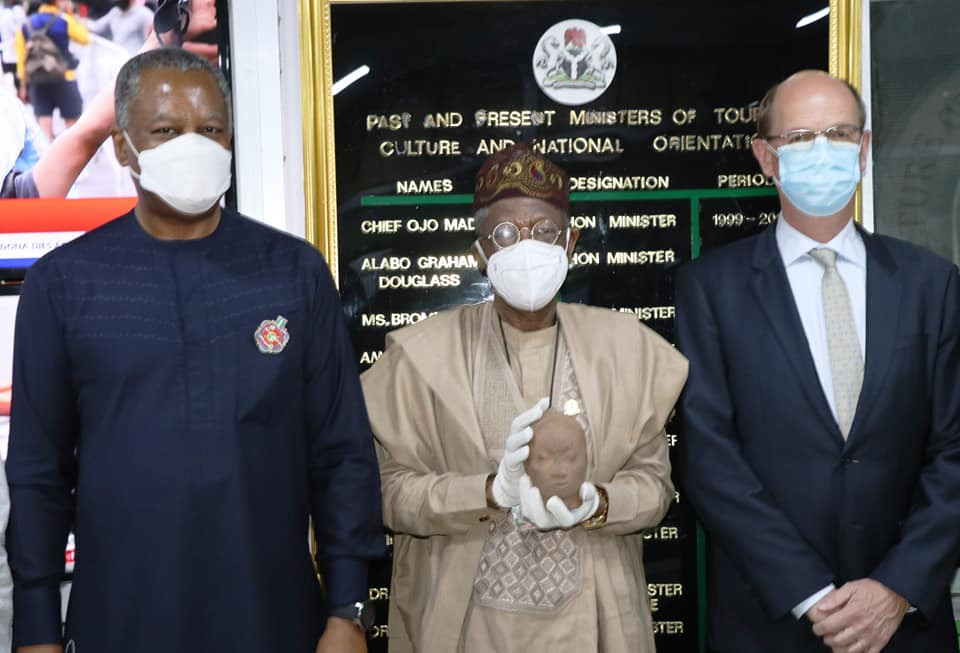 The Nigerian government has applauded Netherlands government for its effort towards the identifying and retrieval of the Ife Terracotta which was smuggled away from Nigeria a year ago.

Naija News understands that the 600-year-old artifact was delivered to the Nigerian government in the Federal Capital Territory, Abuja on November 2, 2020, received by the Minister of Information and Culture, Lai Mohammed.

The Minister in his remarks said the return of the smuggled historic artifact is great development which marks a milestone in the country’s effort to get back all its stolen antiquities. Mohammed noted that the Ife Terracotta was stolen from Nigeria through Ghana to The Netherlands in 2019 with a forged document.

He revealed further that following the interception of the artifact by the Dutch Customs at Schiphol Airport in The Netherlands, Nigeria was invited to prove her case against the suspected smuggler, which the country did successfully, leading to the return of the historic artifact.

He said, “Let me state here that Nigeria believes in joint international efforts to put a stop to illicit export and import of cultural goods. The issue of cultural property should not be a ground of rancour and discord among nations. That is if nations choose to tow the path which the Kingdom of The Netherlands has chosen by insisting on justice, fairness and amity,”

On his part, the Ambassador of the Kingdom of the Netherlands to Nigeria commended the development, noting that the return of the artifact is a fitting gift to mark the 50th anniversary of the UNESCO Convention on the Prevention of Illicit Trafficking of Culture Heritage, of which Nigeria and The Netherlands are signatories.

Naija News understands that following the receipt of the artifact by the Nigerian government, it was handed to the Director-General of the National Commission for Museums and Monuments, Prof. Abba Isa-Tijjani, for cleaning and treatment at the Conversation Laboratory before its eventual display to the public.

In another news, Lai Mohammed, minister of information has denied that he announced the increment of the speech fine from N500,000 to N5 million.

He made this known in a counter-affidavit in response to a suit filed against him at a federal high court in Lagos, Naija News reports.