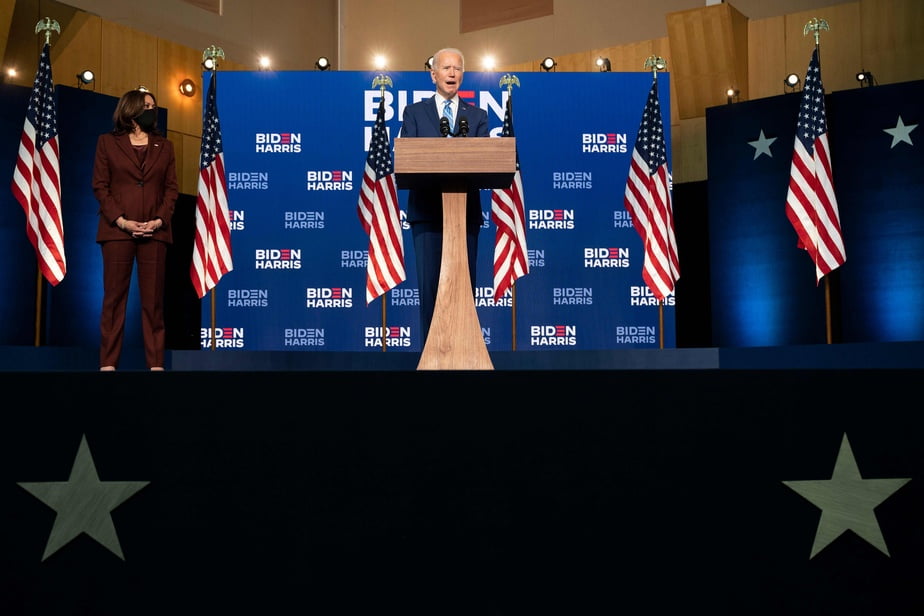 Two days after the presidential election, Joe Biden finds himself at the gates of the White House, having added Wisconsin and Michigan to his conquests on Wednesday a day that saw Donald Trump and his team release multiple statements to discredit and challenge the vote in key states.

By triumphing in Wisconsin and Michigan, the Democratic candidate secured at least 264 of the 270 voters needed to be elected president, according to the Associated Press, against at least 213 for Donald Trump. He could reach the magic number by confirming the slim lead he enjoys in Nevada. That total would include the 11 voters in Arizona, a state where some media outlets, including the PA, declared him the winner as early as Tuesday night.

In late afternoon Wednesday, the former vice president addressed the American public to calm things down and project the image of a statesman capable of bringing together the citizens of a country whose deepest divisions were again revealed in the presidential ballot.

“After a long night of counting, it is clear that we are winning enough states to achieve the 270 electoral votes needed to win the presidency,” Biden said during a speech in Wilmington, Delaware.

“I am not here to declare that we have won. But I’m here to say that when the tally is over, we think we’ll be the winners.” – Joe Biden

Reaching out to the tens of millions of voters who voted for Donald Trump, he added: “To move forward, we must stop treating our adversaries as enemies.”

The race was close in three other states where Donald Trump was struggling to stay ahead – Pennsylvania, North Carolina and Georgia, a Republican stronghold that Democrats could claim for the first time since 1992.

The president was in a better position to win in Alaska.

But the race for the electorate has been eclipsed in part by the statements and manoeuvres of the Republican camp, which has renewed its accusations of cheating and disputed the results or counts in three key states.

Donald Trump’s team first called for a judicial recount in Wisconsin before taking legal action to stop the counts in Michigan, Pennsylvania and Georgia.

In Michigan, the lawsuit cites a decision by Secretary of State Jocelyn Benson, a Democrat, to allow the counting of advance ballots without the presence of bipartisan observers. 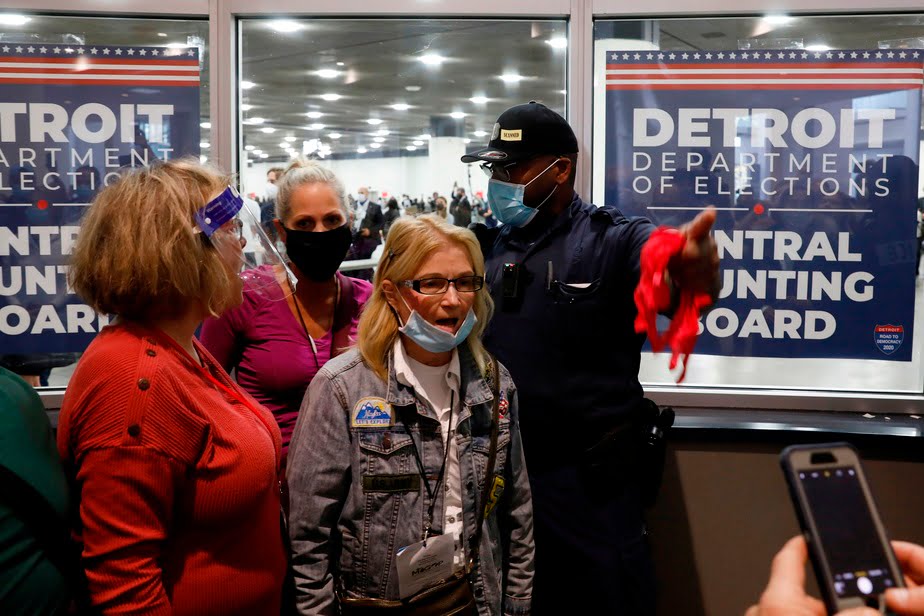 A policeman shows the exit door to a woman who showed up with dozens of other Donald Trump supporters at the TCF Center in Detroit, Mich., In an attempt to stop the counting.

In Georgia, the lawsuit came with about 130,000 advance polls remaining to be counted, 76 percent of which were cast in counties near major cities in the state, including Atlanta. By 11:30 p.m., Donald Trump’s lead was down to 28,963 votes, and some 90,000 ballots remained to be counted. Local officials said around midnight that the next results would be transmitted in the morning of Thursday.

Earlier today, the president again declared himself the winner in states where no media or official had made such projections or announcements. He also renewed his unfounded allusions to electoral fraud.

“We have claimed, for Electoral Vote purposes, the Commonwealth of Pennsylvania (which won’t allow legal observers) the State of Georgia, and the State of North Carolina, each one of which has a BIG Trump lead. Additionally, we hereby claim the State of Michigan if, in fact there was a large number of secretly dumped ballots as has been widely reported!”

The State of Pennsylvania

Donald Trump cannot hope to win a second term without winning Pennsylvania. As of Wednesday morning, half of the state’s 2.5 million mail-in ballots had been counted, according to Keystone State Democratic Governor Tom Wolf. As of noon, Donald Trump held a lead of around 464,000 votes over Joe Biden, a margin lower than he enjoyed at the start of the day, at 550,000 votes.

Joe Biden’s side are hopeful of winning over 75% of the mail ballots yet to be counted and ahead of the president by the end of the count.

For its part, the Republican camp sometimes seemed animated by the energy of despair. Donald Trump’s personal lawyer Rudolph Giuliani demonstrated this at a bizarre press conference in Philadelphia which was also attended by Eric Trump, one of the president’s sons.

“The city of Philadelphia, unfortunately, has a reputation for tolerating voter fraud,” the former New York mayor said, justifying legal action not only in Pennsylvania but also in Wisconsin. 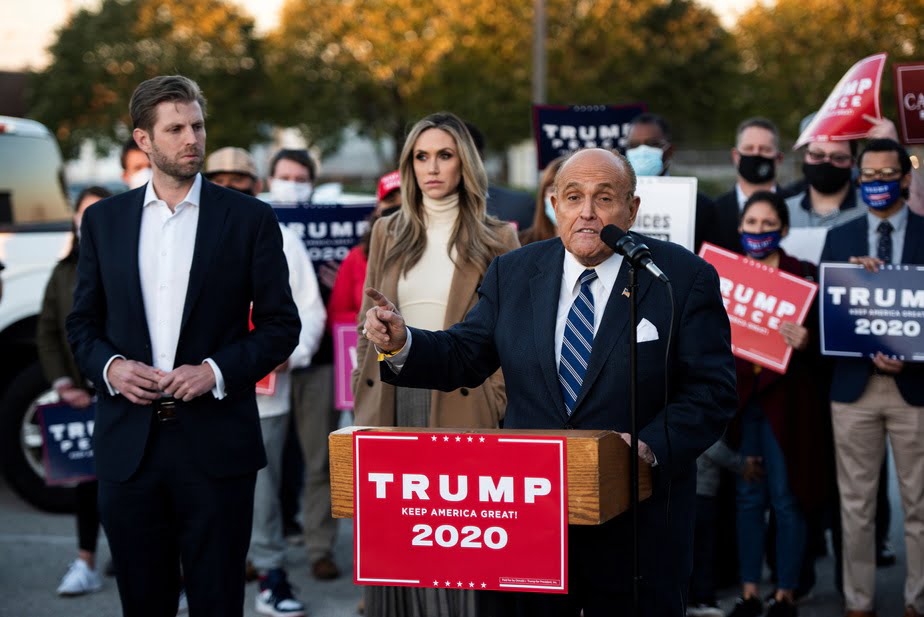 “And you have a reputation for bringing people from Camden [New Jersey] by bus to vote here. But it goes beyond all that.” – Rudolph Giuliani

High-profile Republican figures have criticized the approach of Donald Trump and his allies. Rob Portman, Governor of Ohio, belongs to this group.

“We count the votes. We believe in the rule of law,” he told Fox News. “I’m for Trump, but if [the winner] ends up being Biden, we’ll take it. Each vote must be counted.”

Despite the controversy surrounding the counting of the votes, the greatest calm reigned in Philadelphia the day after the presidential election. Still stationed outside public buildings downtown, Pennsylvania National Guard soldiers were able to enjoy a hot, sunny day without worrying about the violence and chaos some feared.

And Charlene Scott, a 61-year-old black pastor, was not the least bit surprised at Donald Trump’s behaviour.

“If Trump cared about others, I could deal with that,” she said, pulling up to the Philadelphia Convention Center, where the local vote count is taking place. “But he doesn’t care about us. Everything he does is in his own best interest. At the moment, he is trying to save his skin because he knows what awaits him when he is no longer president.“