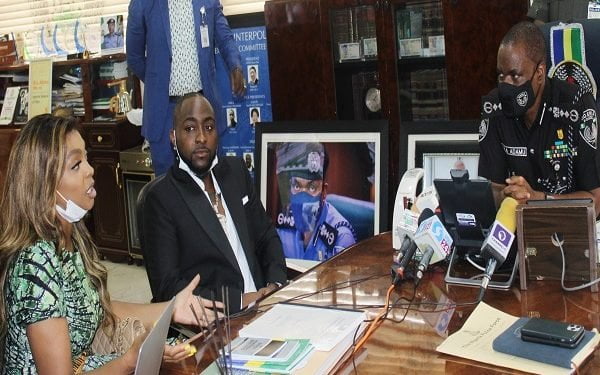 Naija News had reported earlier that Davido visited the IGP in office in Abuja, Nigeria’s capital on Monday over the ongoing #ENDSARS protests.

During the meeting, Davido listed among his four demands that every officer that is part of Special Anti -Robbery Squad (SARS) should be relieved of their duties.

The DMW record label boss who also demanded the immediate release of all arrested protesters, called for justice for the victims of SARS brutality and compensation for their families.

On his part, the Police boss said with SARS being disbanded, there was need to get a new structure to carry out the duties the defunct police unit was carrying out, which is fighting violent crimes.

The IGP disclosed during the meeting that a new police unit would be created next week, adding that the new police unit will be intelligence -driven, properly trained and only act on special occasions that require their attention.

IGP Adamu said that the police unit would be made up of fresh personnel with a fresh orientation and not officers from the scrapped unit.

The police boss said opportunities would be created for members of the public to participate in and make inputs to the formation of the new unit, this was even as he revealed that this was the first time they have decisively taken to dissolve SARS and called for calm as they continue to resolve all the issues.

Speaking further, the IGP who noted that Davido‘s visit to talk about the issue is the best way to deal with the current problem, said in the formation of the new unit corrections would be taken from the experience of SARS.

His words: “We just disbanded yesterday so protesters should calm down and give us time to fix the problem. The general public will be part of the process of getting a new outfit.

“I’m talking to you so I will keep talking to many others and get civil societies involved and get their input towards the new unit,” he said.

Adamu who promised to investigate all cases of brutality and bring perpetrators to book, said the issue of compensation to the families of those affected by SARS’ would be addressed when investigations are concluded.

“We want justice to be done and justice will be done,” he said.

The police boss said officers of the disbanded would be retrained and given other responsibilities in the Force, but will not be reabsorbed into the new unit.

“We admit the trust gap is wide but we will work to bridge that gap,” he said.