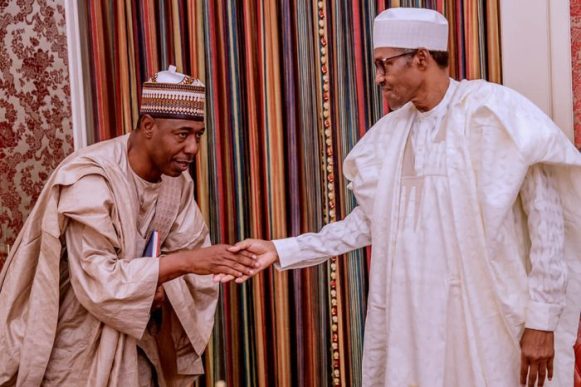 The Governor of Borno State, Prof. Babagana Zulum has appealed to the federal government to engage soldiers from Chad to complement the efforts of the Nigerian Army in overcoming the Boko Haram Terrorists.

The Governor made the call on Wednesday when he hosted the Chairman of the Nigeria Governors’ Forum (NGF) and Governor of Ekiti State, Dr. Kayode Fayemi, who visited him in Maiduguri, to demonstrate solidarity and commiserate with him on the recent attacks on his convoy.

Explaining the reason behind his call, Zulum noted that his statement is not to belittle the efforts of the Nigerian Military who have been doing great in combating the terrorists but to seek more collaboration in ensuring the defeat of the insurgents.

His submissions were contained in a statement issued on Wednesday by NGF spokesman, Abdulrazaque Bello-Barkindo which quoted the Governor as speaking in a somber mood where he noted that “security and development are two sides of the same coin”, arguing that Borno “people had been forced to be unproductive and depend on aid.”

This online medium gathered the visiting governors led by the NGF Chairman also made a donation of one hundred million Naira to the Government and people of Borno State on behalf of the forum.

Meanwhile, Governor Zulum has promised to be more careful with his movements after the recent multiple assassination attempts against him.

According to him, he will now be “more careful” following recent attacks launched by Boko Haram insurgents on his convoy.

This, the governor said while speaking with members of the National Assembly from Borno state when he was paid a sympathy visit in respect of the recent ambushes on his convoy.