The leader of the proscribed Indigenous People of Biafra (IPOB), Nnamdi Kanu, has reacted to the murder of wanted Benue gang leader, Terwase Akwaza, popularly known as Gana in Benue state, northcentral Nigeria by operation AYEM APKATUMA III of the Nigerian military.

Naija News had reported earlier that the murder of the Wanted Benue Gang leader came after he surrendered for the amnesty programme in Katsina-Ala township stadium in Katsina-Ala local government area of Benue North senatorial zone on Tuesday, September 8.

“Other ammunition recovered, according to him, include Qty 766 rounds of 7.62mm special, Qty 27.9mm rounds, Qty 26.pump action cartridge

Major General said Qty1. Machine,Qty2 waist charms, Qty2.finger ring charms and Qty2 fabricated improvised explosives were also recovered, adding that 40 of Gana’s men have been captured in the operation and under custody to be handed over to the civil authorities for prosecution.

Reacting to the murder of the wanted Benue gang leader Gana during a live broadcast on Radio Biafra monitored by this reporter on Wednesday evening, Kanu said: “If Gana was a wanted criminal, how come Channels TV was interviewing him?”

Also in a post on social media network after his broadcast on Wednesday evening, Kanu uploaded a video of Gana answering questions during an interview session with Channels Television and captioned it: “Nothing good comes out from being a saboteur.” 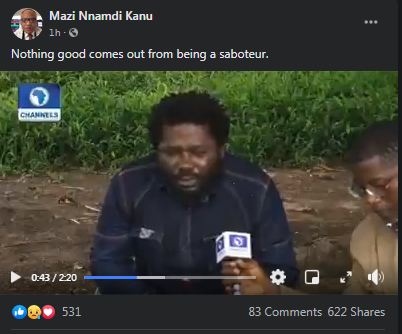