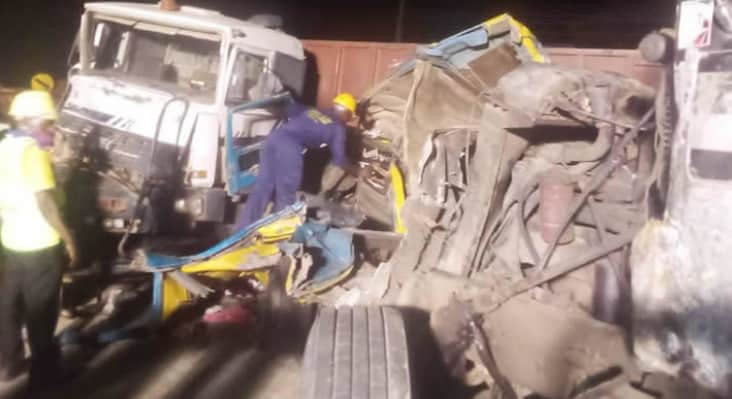 Two women have been reported dead after three trucks and a fuel tanker collided in Lagos State.

According to reports, the two adults died at the scene of the accident which happened at the Anthony area of Lagos State on Tuesday.

Naija News understands that the casualties were recorded after three trucks, a fuel-laden tanker and a commercial bus collided at the above-mentioned location, leaving about seven others persons severely injured.

It was reported that the horrible collision was caused by the reckless driving of one of the drivers.

On his part, while confirming the awful event, the Public Relations Officer, LASEMA, Nosa Okunbor, said, “Upon arrival at the scene of the accident, it was discovered that multiple crashes involving two tipper lorries with number plates AKM 741 ZT and AKM 322 ZT, a fuel-laden tanker with number plate U 779 XZ, and a loaded 40-feet containerised truck with unknown number plate crushing a commercial bus with number plate KTU 198 XN as a result of reckless driving, thereby trapping the occupants inside the bus and causing a vehicular obstruction on the main carriageway.”

“However, the bus was forced open with the aid of the agency’s light rescue equipment and six adults and a child were rescued with varying degrees of injury and were given first aid treatment by the agency’s paramedics before been taken to the Gbagada General Hospital by the LRU ambulance and Lasambus; unfortunately, two female adults lost their lives at the scene of the accident,” Okunbor noted.

Meanwhile, a farmer arrested in Kogi State for planting Cannabis Sativa has said he would rather prefer to be killed than watching authorities destroy his hard work, Naija News reports.