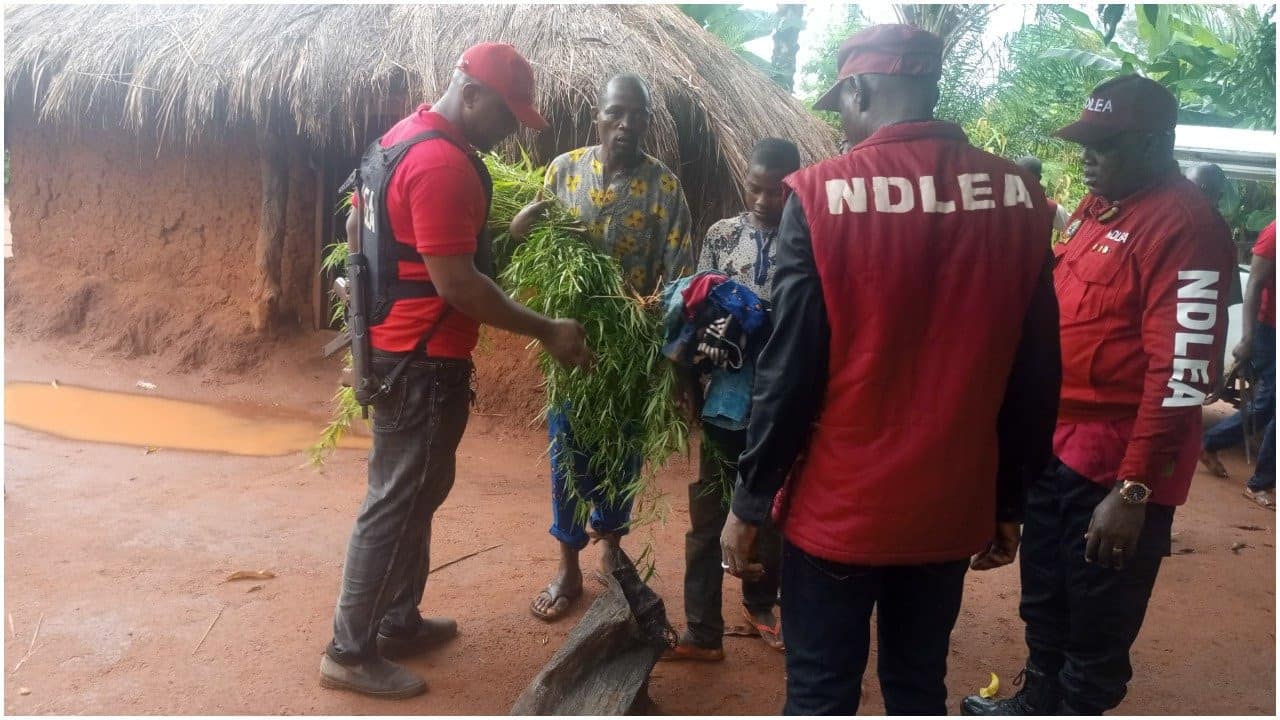 A man arrested in Kogi State for planting Cannabis Sativa has requested that he should be killed rather than him watching authorities to destroy his hard work.

Naija News understands that the farmer whose name is given as Clement Akor, 42, was apprehended by the operatives of Kogi state’s command of the NDLEA.

Mr Alfred Adewumi, commander of the NDLEA in the state who confirmed the arrest of the farmer told newsmen that the Akor and his accomplice David Ameh, a resident of Enabo village in Ankpa LGA were arrested through intelligence.

Speaking on his arrest, Akor who is reportedly a father of six children preferred that his life be taken rather than his 10-hectare cannabis plantation to be destroyed. According to him, he has invested so much on the farm to watch it destroyed.

He, however, admitted that he is aware of the law banning the sale of Cannabis Sativa, but said he doesn’t want to go into arm robbery or kidnapping that was why he resolved to farm Indian hemp to feed his family.

He said; ”I am the owner of this farm. I learnt it in Yoruba land. When I cultivated one last year, it was stolen. So it is this year I bought seed from Yoruba land to plant new ones before I was caught.

“Indian hemp business is luck. In this farm, I can get many bags here. I do sell one bag for N20,000 depending on the area am selling it. It could be more. I spent N12,000 for labour in cultivating this farm. It better you people kill me than destroy this farmland.”

He added, “This is my business. I spent a lot to allow this plant to grow up to this level. In the next two weeks, I am supported to harvest it. Now you people have come here to destroy it. Just kill me, so that I won’t see you people destroying what I have laboured for. I am looking for money because I am illiterate. I don’t want to engage in armed robbery or kidnapping that is why I am into this business of Indian hemp”.

On his part, Adewumi while reacting to the arrest said, “Seeing they say is believing. What you are seeing today is certainly more than three football Field but together. I would make you make your judgment. Just look around, that is the huge expanse. We just left the first farm which is equally a huge cannabis plantation.”

The NDLEA commander again assured the state of his commitment to curb the use of hard drugs in Kogi State.

He said, “We will not relent in fighting against illicit use of a drug that is why we took the fight to their doorstep. Kogi State is the gateway to a man other states in the north, south, east and western parts of this country.

“I had promised at the point of my deployment to Kogi State that I won’t give room for anybody to turn Kogi State to a drug cultivation State. And because of that, we have spread out our tentacles, reach out as far as possible with intelligence gathering, this result is why you are seeing today.”

Adewumi noted that all the suspects would be charged to court as soon as investigation is concluded.

Meanwhile, Naija News has reported of a man in Niger State who bites of his wife’s ear during a feud in the presence of other family members.