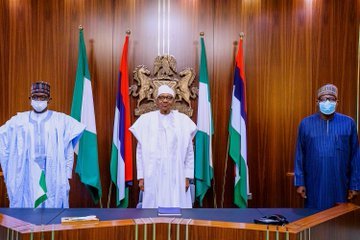 The All Progressives Congress (APC) Chairman, Caretaker/Extraordinary National Convention Planning Committee of the APC, Gov. Mai Mala Buni of Yobe state has revealed that defectors will return to the party soon.

He stated this on Friday while inaugurating the APC reconciliation committee for Ogun and Imo states.

The Yobe state governor stated that he had initiated some peacebuilding and reconciliation mechanisms after he was inaugurated.

According to the APC chairman, this was necessary to give every member a sense of fairness and belonging.

Mai Mala Buni said, “I am proud to say that, with the support enjoyed from members of the party, the committee has recorded remarkable head-ways, reclaiming some distinguished and very valuable members with thousands of their supporters back to our fold.

“I am equally fulfilled that our exploits in reconciling our members in Edo and Ondo states has strengthened the party and further expanded our chances with assurances of winning the governorship elections in the two states with landslide victories.

“Let me also add that, the on-going reconciliatory initiatives of the All Progressives Congress, will soon shock Nigeria’s political space with massive return of former members who felt aggrieved and unwillingly, went to other political parties.

‘Therefore, it is in the spirit of the ongoing reconciliation that the chairmen and members of the Imo and Ogun states reconciliation committees were carefully selected to reconcile aggrieved members and groups within the party.”