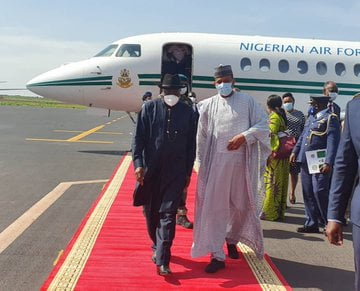 But according to an AFP report on Friday, Jonathan, who is the ECOWAS Special Envoy to Mali, alongside 14 other leaders in the regional bloc, will be in the Malian capital of Bamako for peace talks with the junta leaders including Assimi Goita who has declared himself head of the junta.

Shortly after this, another video emerged, showing the moment Mali’s Presidential Villa was taken over by young protesters following President Keita’s arrest by the soldiers of the Milian Army. In the video, the apparently excited young Malians could be seen playing inside the swimming pool at the Malian Presidential Villa.

African Union and the United Nations have since condemned the military coup in Mali, with the AU and the UN calling for the immediate release of the detained Malian President.

However, early on Wednesday President Keita announced that he is resigning from his post saying that he does not wish blood to be shed following a military mutiny that plunged the country into a political crisis.

“Today, certain parts of the military have decided that intervention was necessary. Do I really have a choice? Because I do not wish blood to be shed,” Keita said in a brief statement broadcast on national television.

The Malian President said he has decided “to give up my duty from now on.”