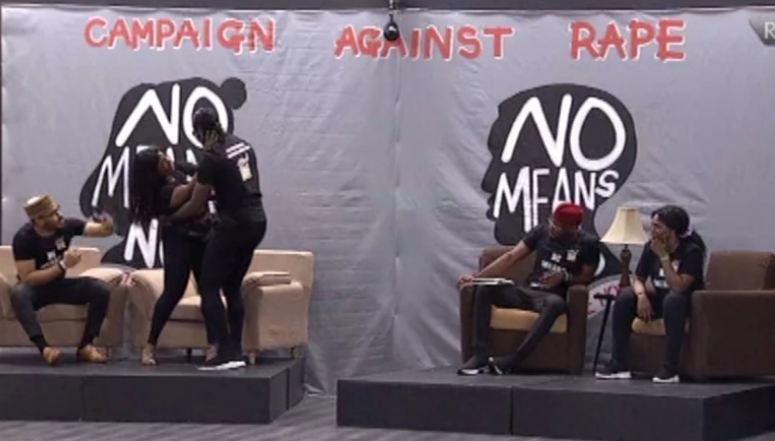 Big Brother Naija Lockdown season 5 housemates may be in for another week of lesser food in the House after losing their wager on Thursday.

Naija News reports that BBNaija lockdown housemates sensitized viewers on gender-based violence and rape with a ‘No Means No‘ themed play as their wager challenge for week four of the BBNaija reality show.

Team White won the quiz with 10 points which earned them 50BB Naira coins for each member, on the other hand, Team Black lost with 8 points and had their BB Wallets reversed to zero.

Despite what some of the housemates see as a precise and informative campaign, the two-part challenge ended on a disappointing note for the housemates after Big Brother critiqued it for being less than the stipulated 15-minute time frame.

For their campaign, the housemates performed a short play about a victim of rape but first drew attention to the backgrounds of the victim and rapist. Praise played the recalcitrant son of abusive parents while Erica, the current Head of House played the naive daughter of overprotective parents.

Vee, Neo’s partner, on the other hand, played the narrator while rapper Laycon opened the protest part of the play with a freestyle on consent.

After the short display by the Housemates, Big Brother, however, expressed disappointment with the task, insisting that the housemates’ approached the campaign mildly but the Deputy Head of House, Kiddwaya explained that there were commercials whilst Ozo added that the message was sensitive that is why they made it short.

Howbeit, the short and easy route cost the BBNaija housemates the week’s increase in Betway wallet as they were told by Biggie that they have lost their wager for the week. Their wallet, however, remains at 700 BBNaira.