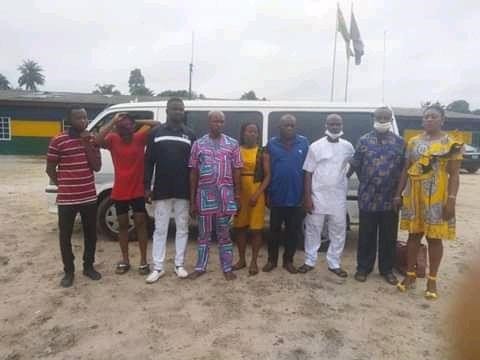 Rivers State Command of the Nigerian Police Force (NPF), confirmed that it successfully halted a robbery attack at Okehi/Igbodo Express Road in Etche, Etche local government area of the State on Sunday, August 2.

The command through its spokesperson, Nnamdi Omoni, disclosed that it killed three men, and rescues other 9 from a robbery gang following a distress call to the command by some persons that passengers along the road were attacked by the desperate armed men.

Omoni reveals that the Anti-Robbery Squad of the Okehi Division were dispatched immediately to the venue of the incident after receiving the emergency call.

According to him, they engaged in a gun duel upon reaching the scene of the incident. He added that they were able to shot three of the robbers, leaving them with severe injuries.

However, the three were confirmed dead before they could receive medical attention, while others escaped into the bush with bullet wounds.

“Nine passengers on board an 18- seater Hiace bus, were rescued unhurt and were able to continue their journey,” He said.

Among other things recovered from the robbers were a locally made single barrel gun and rounds of live cartridges, Naija News understands.

Omoni noted that the Anti-Robbery squad has launched a manhunt for fleeing members of the gang. He again urged residents in the state to cooperate with security men in other to ensure the arrest of more robbers troubling the community.call 08032003514, 08098880134.

Meanwhile, Law enforcement agents have been called to intervene in the case of a young boy who was allegedly severely beaten by his step-father for eating part of the food left for supper, Naija News reports.