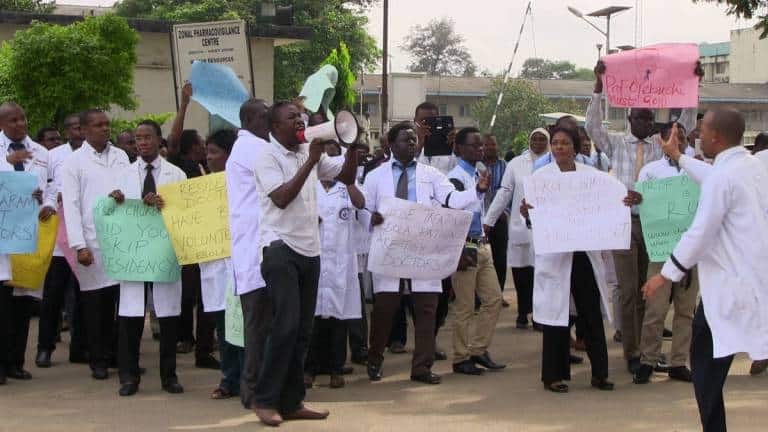 A few days after Governor Udom Emmanuel of Akwa Ibom State announced on a live AKBC Radio and Television programme a review of 80% of the Consolidated Health Salary Structure in the state, the state Joint Health Sector Unions have suspended its industrial strike.

Naija News understands that the health workers had since June 17, 2020, threatened to commence an industrial strike over non-implementation of Consolidated Health Salary Structure, which they later did.

However, a statement jointly signed by the leadership of JOHESU in the state which copy was also made available to newsmen, said it has suspended the strike and ordered members to resume work immediately.

The statement which includes the signature of the chairman of the National Association of Nigeria Nurses and Midwives, Patrick Odu, chairman of the Medical and Health Workers Union of Nigeria, Godwin Archibong, and chairman of the Nigeria Union of Allied Health Workers professionals, Aniebiet Obot, reads; “Sequel to the agreement signed by the Organised Labour represented by the Joint Public Service Negotiating Council on Tuesday 28 July 2020, in respect of the industrial action embarked upon by the Joint Health Sector Unions over non-implementation of Consolidated Health Salary Structure, the Congress of JOHESU rose from its meeting today 29, July 2020 and resolved to suspend the strike.”

It added, “Consequently, the strike is hereby suspended and members directed to resume their normal duties immediately.”

The health workers applauded the state governor for showing concern to their request, hoping also that the strike would totally end soon after all outlined issues a met.

In another news, Naija News reported that a community in Kogi State has been left in commotion after bandits stormed their community and killed 13 people from the same family.