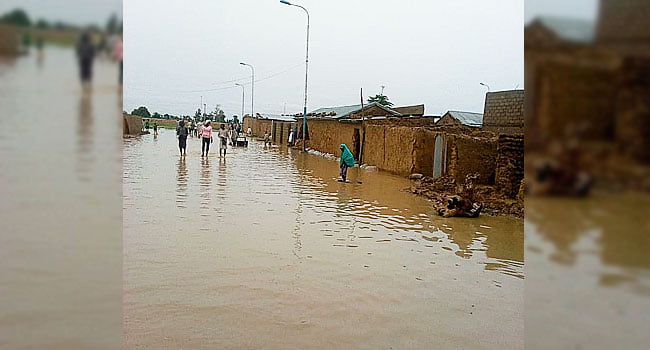 Recent heavy downpour in Gashua, a town in the Bade local government area of Yobe State has sent residents homeless as the whole community is said to be flooded.

According to a resident who gave his name to newsmen as Mohammed Isah, most parts of the town have remained flooded following heavy rainfall on Sunday, July 12.

Isah noted that the community is currently battling with deplorable road infrastructure and lack of drainage systems that could help direct water to the right channel whenever it rains.

He lamented that the downpour has left residual water lying around their apartments and feeding a malaria epidemic.

“This has been the scenario for years, poor, clogged and insufficient drainage systems have made Gashu’a and other towns of Yobe like Nguru susceptible to flooding,” said Isah.

He added, “Many parts of the community are now inaccessible while the raining season is approaching its peak”.

Another resident whose name is identified as Nazifi Gashua, condemned the situation, noting that is shouldn’t be heard considering the calibre of people that Gashua town has produced who are in high authorities in both state and federal level.

He challenged the government, political leaders and well-doing personalities from the community to address the disturbing situation, find a lasting solution to avoid further damage of properties and loss of lives.

Meanwhile, Naija News had reported earlier that the Director-General of the National Emergency Management Agency, NEMA, Muhammadu Muhammed, has revealed that the country will be greatly affected by a flood in recent days.

Muhammed in a statement made available to newsmen on Friday, July 10, urged state emergency managements to commence an immediate sensitization of residents in the city and local areas.