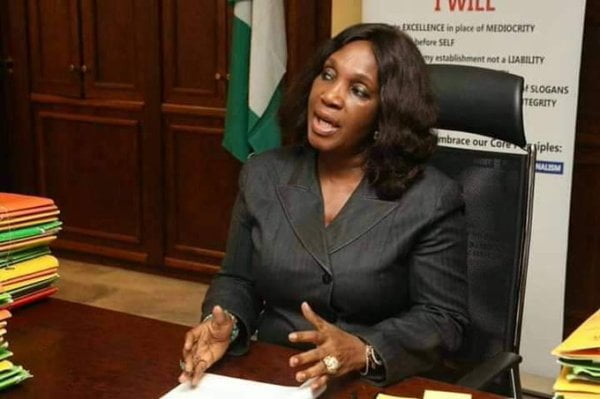 A Former Acting Managing Director of Interim Management Committee of the Niger Delta Development Commission (NDDC), Joy Nunieh has revealed why she was forcefully removed from office.

Speaking shortly after appearing before the Senate ad-hoc committee investigating NDDC on Friday, Joy Nunieh accused the minister of Niger Delta, Godswill Akpabio, of fraud and an attempt to take “an oath of secrecy” which was meant to keep her from exposing fraud at the commission.

Mrs Nunieh explaining further how the minister plotted her removal said that the minister wanted to use her as a tool for committing fraudulent acts within the NDDC. She said also said that Akpabio threatens to sack from the day of her inauguration as the managing director of NDDC.

Nunieh in Her words during the Interview

He said to me in the car, ‘Madam MD, if you don’t do what I say, the same pen with which I used to sign your paper is the same pen I’ll use to remove you.”He said the first thing I should do when I get to Port Harcourt is to change the dollars in the NDDC account. I was scared to do that and he claimed that I have a poverty mentality that I’m afraid of money. All of you knew that he accused me of refusing to spend money. It is strange today, it’s about money.”After that, he came to Port Harcourt two days after the inauguration and told me that the first thing I should do was to change the dollars.”

Mrs Nunieh also said Mr Akpabio never signs any documents but prefers to use his subordinates as proxies in committing fraud.