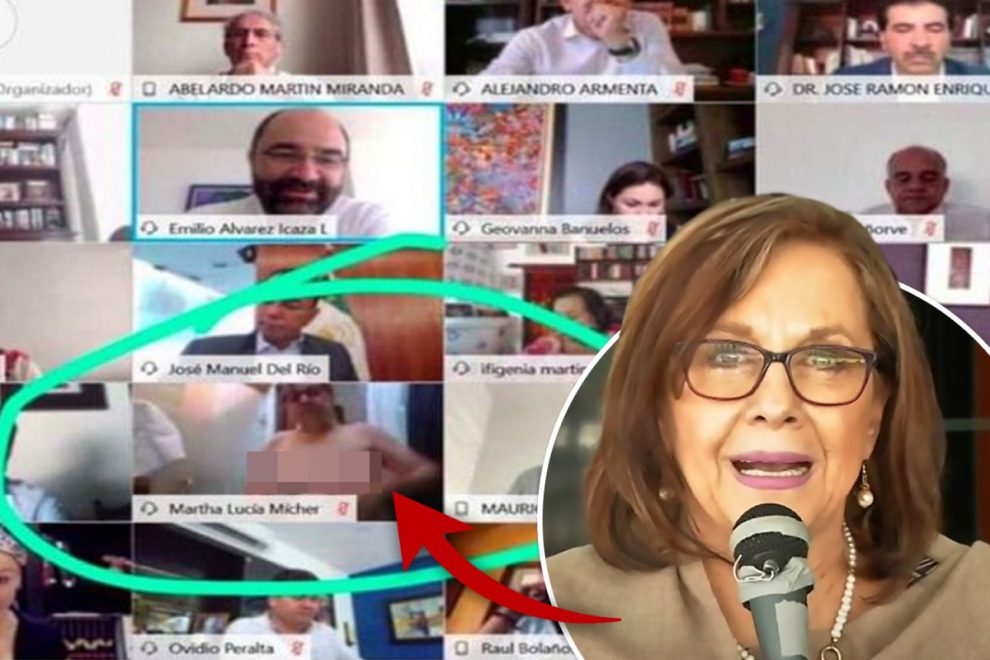 American communications technology company founded in 2011, the Zoom Video Communications has been lately appreciated by organizations including government agencies, schools, religious groups and also among groups of individuals as an easy way of interacting, since the outbreak of Coronavirus across the world.

The use of the same has, however, gone wrong after a Mexican lawmaker mistakenly dropped off her clothes during a live meeting with other honourable colleagues, thinking she has shut down the conversation.

A now-viral photo grid has portrayed Mrs Martha Lucia Micher in a bad light after one of the attendees of the live video meeting shared the indecent image.

Naija News understands that the senator had gone topless during the Government Zoom call, mistakenly thinking she had turned off her camera.

Reports had it that the meeting by which the incident occurred includes members of the National Regeneration Movement political party, the Bank of Mexico, and journalists addressing risen issues on COVID-19 pandemic.

Reacting to the incident and people spewing words against her actions, Senator Micher tendered a public apology for the unplanned act, she, however, blasts those who laughed her using ill words.

She said: "I am Malu Micher, and I am not ashamed to have shown part of my intimacy by accident, because it is exactly the notion that a woman is 'just her body' that has allowed and fomented the objectification of women against which I have always fought."

"I am a woman of 66 years of age who has breastfed four children, three of whom are today professional and responsible men, and I feel proud of my body for having nourished them.

"I am a woman who has fought for the left for almost 40 years and who has occupied various public roles in my fervent commitment for the defence of human rights, I am a woman who is not ashamed of her body, I love it and I take care of it."

The 66-year-old senator, however, received an expression of love from members of the government who were also live with her on the zoom call, Naija News understands.

In another news, former United States vice president and Democratic presidential aspirant, Joe Biden have schooled President Donald Trump in a recent statement over his reaction towards protest staged by citizens who stood before the White House to decry George Floyd's demise.