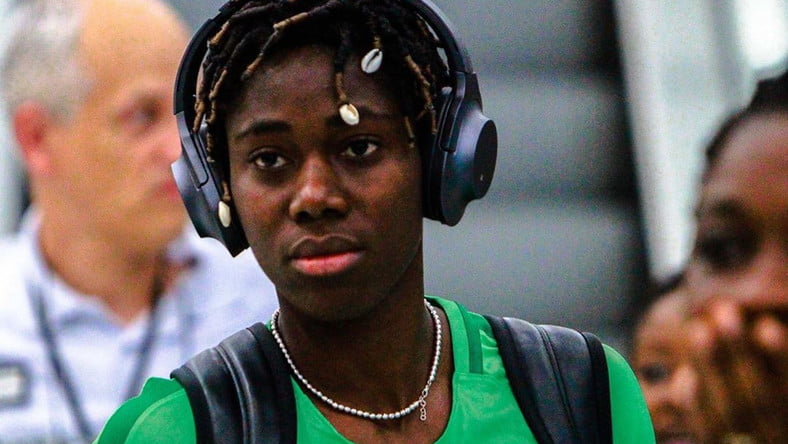 Nigerian International female footballer who plays as a striker for the Spanish club, FC Barcelona Femení in the Primera División, Asisat Lamina Oshoala better known as Asisat Oshoala has shared an unbelievable amount been paid to some female soccer players in Nigeria.

According to the 25-year-old in a recent Instagram live video interview with the Channels Television, female soccer players in Nigeria received nothing but peanuts.

The Super Falcons’ striker alleged that the Nigerian government is not giving priority to the female players and hence the reason why they receive as low as N30,000 per month.

Asisat in her submission urges the Nigerian leagues to improve in salaries paid to the female players, adding that more attention should be given to them just like the opposite gender.

She said, “The league has to be constant. They have to look into the welfare of the players.”

“Some players get paid, maybe N30, 000, a month or maybe N60, 000 maximum and that’s like a lot. They need to be more concerned about the welfare of the players,” Asisat noted.

“they are not just paying attention to the female league in Nigeria,” Asisat added.

Asisat, however, while reacting to whether the female player should clamour for payments as much as their male counterparts receive, said that “it is not the right time to fight for such in the country.”

“We don’t have a proper structure in my country and then you want me to come and start saying I want the same amount you are paying the Super Eagles?”

“When we get to that level agitations for equal pay can take centre stage. I would rather say; give us a standard coach for the next five years and let the salary be constant and let the game bonus for my teammates be constant,” Asisat reiterated.

She added, “And let us play a lot of friendly games as much as we can. And when we get to that level, we start discussing the next stage. It is something that has to be with a plan.”

Meanwhile, Manchester United has reached an agreement with former Super Eagles striker, Odion Ighalo for a contract extension to his current loan deal.