Popular Nigerian singer and father of three, David Adeleke, also known as Davido, has stirred another reaction again on social media after he tipped that he will get Chioma pregnant again.

It could be recalled that Davido and his baby mama Chioma, about a month ago unfollowed each other on the social media platform, Instagram precisely.

Naija News understands that the drama all started after reports that the Executive producer of GoldenBoy Ent. King Patrick, said Peruzzi who was signed under his record label is having an affair with Chioma.

However, some moments later after the whole drama died down, the two lover birds relate back.

The DMW boss has hinted of his plan in a recent post by Chioma on Instagram, saying that he loves her so much and that he is set to get her to have another baby for him again.

Chioma had earlier shared a photo of herself on her Instagram page before the father of her child, Davido reacted to say, “U so sexy I’m gettin U pregnant again…. I love u my dear wife … who ever near u nah 6 FT!!”. 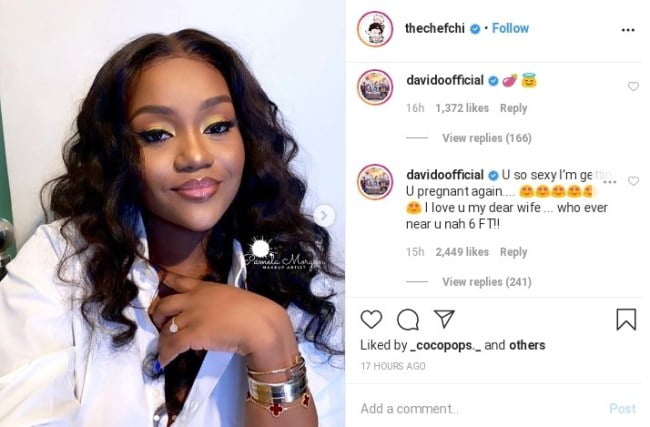