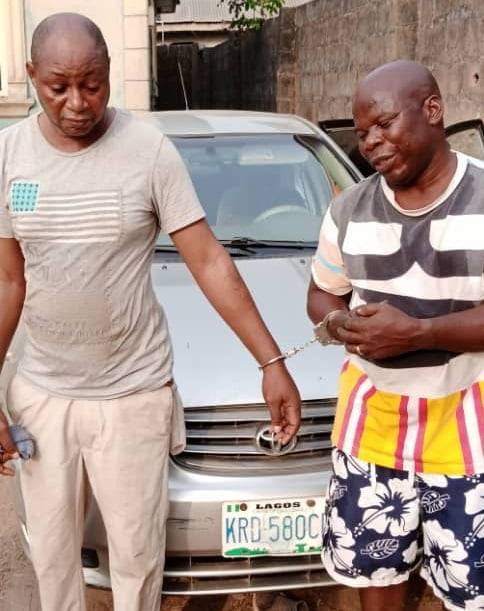 The Lagos State Police Command has arrested robbers who specialize in stealing vehicles from Church gatherings.

Operatives from the Ipaja Police station successfully nabbed the two suspects after long trail on a robbery they carried out on January 1, where they took away from a Church car parking space a Toyota Car in Ogun State.

Confirming the arrest, the Lagos state police command spokesperson, Bala Elkana, in a statement disclosed that the names of the suspects as Bamidele Adebayo ‘m’ and Hakeem Taofik ‘m’.

He added that the suspects had carried out a robbery at a church in Shagari Estate Ipaja, where they stole a Toyota Corolla saloon car and moved the vehicle to Ijagba village in Sango Ota, Ogun State, where they were later nabbed.

Mr Bala however, said that the suspects will be charged to court soon.

In another report, Naija News reported that Niger State police command has arrested four suspects with a series of armed robbery attacks in the Kantoma area in the Suleja Local Government Area of niger state.

Those arrested include Ahmed Usman, 29; Chinedu Eche, 28; Chibuzor Ogochukwu, 29; and Okechukwu Oke, 30, all from the Bakin-Iku area of Suleja.

According to the spokesman for the command, Muhammad Abubakar confirmed the development in Minna on Sunday.