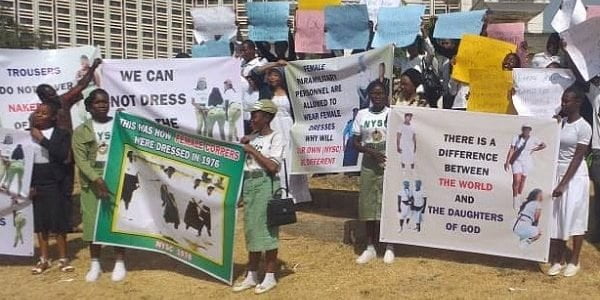 Nigerian Controversial OAP, Daddy Freeze, has reacted furiously to the recent agitation which calls for the inclusion of ‘Skirts’ in the uniform of National Youth Service Corps (NYSC) kits.

In a post by the OAP on Friday, he stated that the movement is a madness.

He said; “Is this not madness?”

“Even the disciples had abandoned these old covenant Jewish laws as far back as 2000 years ago, so why glamorize your ignorance by resurrecting them now?”

He also gave some biblical references to the clarity of those calling for the inclusion of skirt in the NYSC system in the name of Religion right.

Is this not madness?? – Even the disciples had abandoned these old covenant Jewish laws as far back as 2000 years ago, so why glamorize your ignorance by resurrecting them now?? – ◄ Galatians 2 ► New Living Translation [14] When I saw that they were not following the truth of the gospel message, I said to Peter in front of all the others, “Since you, a Jew by birth, have discarded the Jewish laws and are living like a Gentile, why are you now trying to make these Gentiles follow the Jewish traditions? – ◄ Galatians 2 ► New Living Translation [17] But suppose we seek to be made right with God through faith in Christ and then we are found guilty because we have abandoned the law. Would that mean Christ has led us into sin? Absolutely not! [18] Rather, I am a sinner if I rebuild the old system of law I already tore down.

Meanwhile, Naija News had reported that Corps members who have the habit ghosting their service year have been sternly warned by the National Youth Service Corps (NYSC).

According to the National Youth Service Corps (NYSC), those who fail to report for service in the Service Corps in the manner directed by the Directorate “is guilty of an offence and liable on conviction to a fine of N2000.00 or to imprisonment for a term of 12 months, or to both such fine and imprisonment.”

It reads further that, “This is to inform all eligible Nigerian graduates that NYSC Management has recently commenced the process of prosecuting mobilized graduates who willfully failed to turn up for National Service especially during. 2019 Batch ‘C’ Service Year.