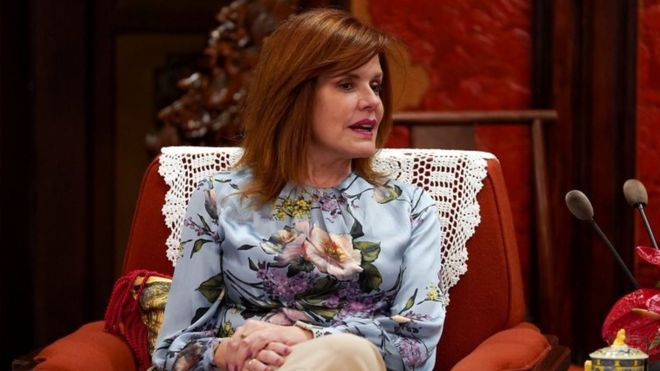 The woman who was named “acting president” by Peru’s Congress, Mercedes Aráoz has tendered her resignation in an unexpected U-turn.

Naija News understands that Araoz resigned just hours after she was sworn-in.

Araoz resigned one day after being sworn in by lawmakers as the country’s interim president, easing a standoff with President Martin Vizcarra over his decision to dissolve Congress.

Araoz’s resignation cames after President Martin Vizcarra, had on Monday, disbanded the opposition-controlled Congress and called for fresh elections in January.

He said the move was necessary because the legislature has refused to pass a raft of anti-corruption reforms he has been championing, as well as changes to the way top judges are appointed, NAN reports.

Meanwhile, Araoz in the midst of all these said she was unable to exercise the position of interim president given to her by Congress after the Organization of American States called for Peru’s Constitutional Court to determine on the legality of the dissolution; this was revealed in a letter she received and posted on her Twitter account late Tuesday.

While citing her reasons for her resignation, Araoz said she was quitting as vice president because there had been a rupture in the constitutional order. She said she hoped the move would allow Peru to hold a general election “for the good of the country.”

Ms Aráoz had been Mr Vizcarra’s vice-president until he decided to dissolve Congress on Monday.

She was picked to lead Peru by opposition lawmakers who argued that by dissolving Congress, Mr Vizcarra had breached the constitution and that his position was therefore vacant.

They also suspended Mr Vizcarra from office for a year, but the government argued that because that vote had been carried out after the president had dissolved Congress, it was null and void.