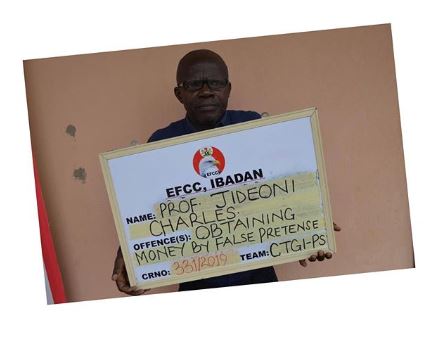 Naija News understands that Professor Jide-Oni was arraigned by the Economic and Financial Crimes Commission (EFCC) for allegedly obtaining money under false pretence and engaging in advance fee fraud.

Professor Jide-Oni was reported to have been arraigned by the Ibadan zonal office of the EFCC on Wednesday, September 4.

His arrest was sequel to the findings of the activities of an illegal financial outfit he floated through which he allegedly swindled his victims of several millions of naira.

This online news platform understands that the some of the victims of the professor had earlier written a petition to the Commission which led to the investigations that indicted him in the alleged fraudulent act.

However, the presidning judge Justice Oweibo granted Jide-Oni bail to the tune of N10 million and two sureties in like sum; this is as a result of the bail application filed and argued by his lawyer on his behalf.