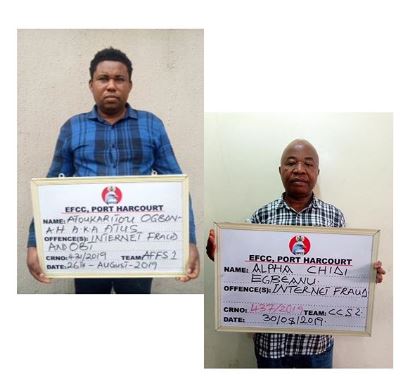 Naija News understands that the two arrested suspects were apprehended as a result of the ongoing collaborative investigations between the EFCC and the Federal Bureau of Investigation (FBI).

The suspects were separately arrested in Port Harcourt, the Rivers State and Owerri, Imo State.

In a report obtained by Naija News, one of the suspects identified as Ogbonnah Atoukaritou, was described as a leader of a loose syndicate of fraudsters who allegedly engaged in Business Email Compromise (BEC). Atoukaritou was arrested in Port Harcourt while the other suspect, Alpha Chidi Egbeonu, suspected to be involved in defrauding a US-based victim identified simply as Goldberg Segalla LLP and other yet to be identified victims, was arrested in Owerri, the Imo state capital.

The suspects are expected to be arraigned before a court of competent jurisdiction for possible prosecution, upon the completion of investigation.