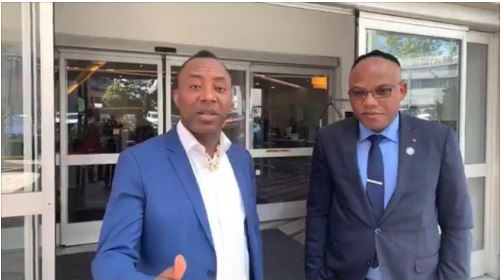 Omoyele Sowore, the detained activist and convener of the RevolutionNow Movement, says the allegation by the Department of State Service (DSS), that he was sponsored by external forces to topple President Muhammadu Buhari’s administration is false.

Naija News reports that Sowore made this comment on Tuesday in an affidavit deposed on his behalf by a lawyer in Falana’s chamber, Abubakar Marshal at the Federal High Court in Abuja, Nigeria’s capital.

Sowore told the court that though he had a meeting with Nnamdi Kanu, the leader of the proscribed Indigenous People of Biafra (IPOB), in the United States of America, he did not receive any fund to wage war against President Buhari.

Sowore, who is also the Publisher of SaharaReporters, told the court that contrary to allegation the DSS levelled against him in its counter-affidavit, he has never visited Dubai or any country in the United Arab Emirates, UAE, since he was born, saying the agency was not aware that he had a meeting with the IPOB leader till it was published on his online news platform.

In the affidavit, Sowore said though the Revolution Now mass protest took place in many cities across Nigeria on the August 5 in his absence, there was no reported attempt to violently topple the governmen in the country.

Sowore said: “That on Tuesday, 2nd July 2019 he met with Mazi Nnamdi Kanu, a British national in New York City, United States of America and at the end of the said meeting, they both issued a joint press statement. A copy of the said statement is hereto attached and marked EXHIBIT A. The Applicant/ Respondent did not know about the meeting until it was reported in Sahara Reporters, an online medium published by him.

“That contrary to the deposition in Paragraph (vii-xi) of the counter-affidavit, there was nowhere in EXHIBIT SSS1 where he expressed a desire to launch any violent attack or topple any government in Nigeria.

“That is further response to paragraphs 4 (vii-xii) he did not plan a coup with anyone but he mobilized the Nigerian people including students and youths, workers, market women and other oppressed people to influence the federal government, the 36 state governments and 774 local governments to address the crises of corruption, maladministration, mismanagement of the economy and insecurity.

“The present administration had promised to create one million jobs per annum, build one million houses per annum, end epileptic supply of electricity, end corruption and impunity and restructure the country, end insecurity and manage the economy in the interest of the Nigerian people.

“Apart from failing to address these problems, the Muhammadu Buhari administration has compounded them in a manner that the majority of Nigerians are frustrated.

“That aside the myriads of challenges noted above, insecurity has increased to the extent that thousands of people have been killed by terrorists, kidnappers, armed robbers, armed herders, armed soldiers and armed policemen without any hope in sight.

“That contrary to the deposition in Paragraph 4(xiv) of the counter-affidavit, the Respondent / Applicant has never visited Dubai or any of the UAE Cities in his life and he has never received any money from any individual, group or organization for the purpose of removing the President or freeing any person through any unlawful means or for any other unlawful purpose whatsoever.

“That due to the refusal of the Applicant/Respondent to obey the court orders for the release Sheikh Ibraheem El-Zakzaky and his wife from unlawful custody his supporters have been protesting against the refusal of the Federal Government to abide by the said orders.

“That like million other persons worldwide, the Respondent / Applicant has called on the Federal Government of Nigeria to obey the court order and release the said Sheikh Ibraheem El Zakzaky and his wife from custody.

“That contrary to the assertion in paragraph 4 (xvi)he has never held any meeting or consultations with members of the Islamic Movement in Nigeria.

“That the Respondent / Applicant needs treatment on his ankle which was seriously strained during the midnight invasion of his abode on the said Friday 2nd August 2019 by the armed agents of the Applicant/Respondent.

“That his pedigree as a pro-democracy activist, social crusader and front line opinion moulder is unblemished and he is one of the activists who played a vital role in restoring democracy in Nigeria on May 1999. “That on August 4, 2019, he and other organizers of the peaceful protest released “the rules of engagement” where they said that, “We eschew all forms of violence. No protester should throw any object as little as stones or attack any security officials. We are aware of their intent to provoke the mass unduly by using undue tactics and sponsored agents, so as to give the protest a bad name. We encourage all Nigerians to remain calm as we are ready to fight these injustices to a logical conclusion”. Attached hereto and marked EXHIBIT Bis a copy of the said news press release of the rules of engagement.

“That contrary to the averments in paragraph4(xvii-xxii) of the counter-affidavit, the protests actually held on the 5th August 2019 and none of the persons who took part in the said protests engaged in any form of violence or attack.

“The Respondent/Applicant further avers that the agents of the state unleashed violence and mayhem on peaceful protesters. Attached hereto and Marked EXHIBIT C is a news report confirming the assertion.

“That the persons who were arrested and charged for participating in the peaceful protest of 5th August 2019 have since been released on bail.

“That even President Muhammadu Buhari was once tear-gassed by the Applicant/Respondent and the Nigeria police force for protesting against electoral malfeasance. Attached herewith and marked EXHIBIT D. A copy of a newspaper report on how the Applicant/Respondent and the police tear-gassed General Muhammadu Buhari and other political leaders in the country.

“That President Muhammadu Buhari and other leaders of the ruling party had led street protests in the past which the Applicant/Respondent claimed were planned to overthrow the federal government. Attached hereto and marked EXHIBIT E is the news report confirming the assertion.

“That President Muhammadu Buhari led protest marches after each consecutive loss of the presidential elections won by Messrs Olusegun Obasanjo, Yar’adua and Goodluck Jonathan of the PDP in 2003, 2004 and 2014 but was neither arrested nor charged for planning to overthrow the government.

“That the Respondent/applicant is not a coup plotter like the military officers who toppled elected governments in Nigeria in January 1966 and December 1983 and who were never arrested and prosecuted by the Federal government.

“That based on the misleading advice of the Applicant/Respondent, any political leader who criticized the federal government has always been accused of engaging in sabotage, treason, treasonable felony or terrorism. Individuals and bodies that have been so accused include: “The Nigeria Labour Congress under the leadership of Comrade Adams Oshiomole, the current Chairman of the APC had been accused of sabotaging the economy for protesting against the incessant increase in the prices of fuel under the former Olusegun Obasanjo administration.

“In 2010, the Jonathan administration accused ex-military president Ibrahim Babangida, Alhaji Atiku Abubakar and other PDP leaders of sponsoring the bomb blast which occurred at Abuja and killed 16 people and injured several others. The Applicant/Respondent even arrested and detained Chief Raymond Dokpesi. But the alleged sponsors of the bomb blast were not prosecuted due to lack of evidence to substantiate the monstrous allegation emanating from the Applicant/Respondent. In 2011, General Muhammadu Buhari was accused of sponsoring political violence.

“In 2014, the Jonathan administration accused the Academic Staff Union of Universities (ASUU) of sabotage for going on strike to demand adequate funding for public universities. Exhibit F is a document confirming the assertion

“In May 2015, the federal government warned those who were planning a coup de tat to desist from the plot. Even though the Chief of Army Staff, General Tukur Buratai denied the involvement of the Nigerian Army in the planned coup but the alleged coup plotters have not been arrested and prosecuted.

“In 2015, operatives of the Applicant / Respondent and armed soldiers invaded the Lagos State Secretariat of the APC and carted away computers. At the end of the invasion, the Applicant / Respondent claimed that it had found evidence of the planned rigging of the 2015 general elections but the leaders of the APC were not charged with any offence. “In 2014, the Jonathan administration filed terrorism charges against the 12 leaders of the APC in Ekiti State for frustrating the alleged plan of the PDP-led government to rig the 2014 governorship election in Ekiti State but the charge was withdrawn due to lack of evidence. Exhibit G is a document confirming the assertion.

“In 2018, the federal government claimed that it had credible evidence of plans to sabotage Buhari’s administration but it has not charged the so-called saboteurs with treason or treasonable felony.

“The federal government has either blamed disgruntled Nigerian politicians or the former regime of the late President Mummar Gaddafi for killings by armed herders but the Buhari administration has not charged any of the disgruntled politicians with any offence. Even the 3,000 herders arrested and detained for murder and sundry offences have not been arraigned in any court in Nigeria.

“After the 2019 general election the federal government also alleged that defeated candidates were sponsoring bandits and herdsmen to prevent the inauguration of the President but the so-called sponsors of violence have not been arrested and prosecuted by the Applicant / Respondent”, Sowore added.