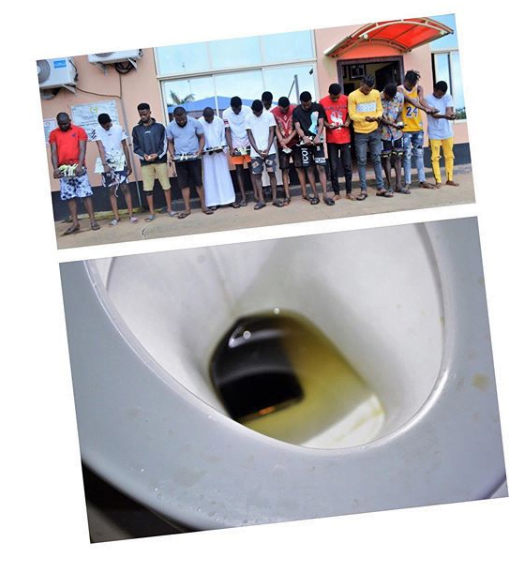 Naija News understands that the operatives of the Nigeria’s anti-graft agency foiled an attempt by one of the suspects identified as Fisayo Falade, 20 who tried flushing his mobile phone in a water-closet toilet, in his deliberate attempt to deny the operatives access to potentially incriminating data about him.

Falade, was among the 15 young men who were arrested in Ibadan for internet-related crimes.

The operatives of the EFCC arrested the suspects during a raid on two locations in the ancient city.

This online news platform understands that ten of the suspects were arrested at Akatanpa Powerline, while the other five were nabbed at the Kushenla area of the Oyo state capital.

The suspects in a report obtained by Naija News reveals that the youths are between the ages of 20 and 28 years.

They were alleged to be hiding behind fake names and identities to perpetrate fraud, dispossessing their unsuspecting victims of their hard-earned money.

A at the time of this report, two exotic cars, laptops, mobile phones and several documents containing false pretence were recovered from the suspected Yahoo Boys.

They have said to be currently facing interrogation in the hands of the EFCC  who might be considering charging them to court for possible prosecution.