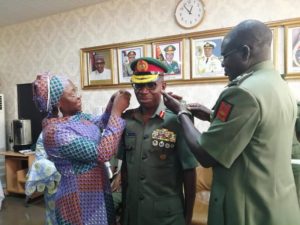 Naija News understands that the decoration took place at the Armed Forces Command and Staff College, Jaji in Kaduna State.

Naija News understands that Aeosun was a Major General, Biu was a Brigadier General while Danjibrin was a Lieutenant before the special promotions.

The Permanent Secretary, Batagarawa, said the promotion of the new officers was another remarkable milestone in their carrier as well as reward for their loyalty, commitment and dedication to service.

She commended Adeosun for the achievements in the fight against insurgency in the northeast, adding that Adeosun laid the foundation for recent feat the army had achieved.

“Your achievement in the fight against insurgency cannot be forgotten in a hurryBiu has also made remarkable contribution to the successes of the Operation Lafiya Dole since he assumed the headship,” she said.