The Independent National Electoral Commission (INEC) on Friday released the timetable for the bye-election of the Pengana state constituency of Plateau state.

This was made known in a document signed by the secretary to the commission, Mrs. Rose Oriaran-Anthony, obtained by Naija News on Friday.

The electoral umpire on Friday tweeted a document showing the full and detailed schedule for the election.

The document noted 5th of July as a notice for the election.

According to the document, 10th of July marks the last day for the conduct of primaries by political parties who will be participating in the election slated for 3rd of August, 2019.

The statement also noted Friday, 12th of July the last day for the submission of names and addresses of party agents to the electoral officers.

Naija News also understands that campaigns by participating political parties and candidates end on Thursday, August 1, in accordance with the Section 99(1) of the electoral act 2010; which mandates all campaign to end at midnight (24 hours before the election). 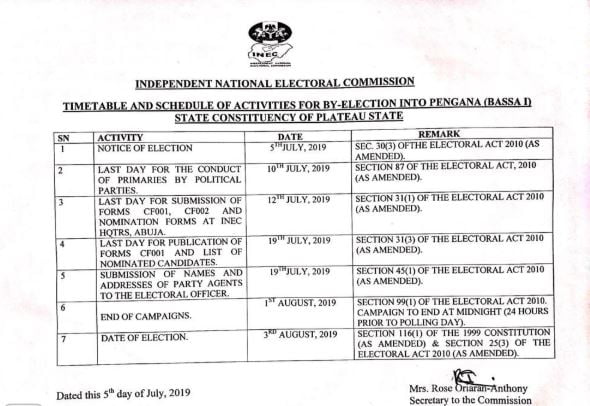 The INEC time table comes after the death of a member representing Pengana State Constituency in the Plateau State House of Assembly, Ezekial Afon.

Naija News recalls that Afon was reelected Saturday under the platform of the All Progressives Congress, but died hours after INEC confirmed his reelection.