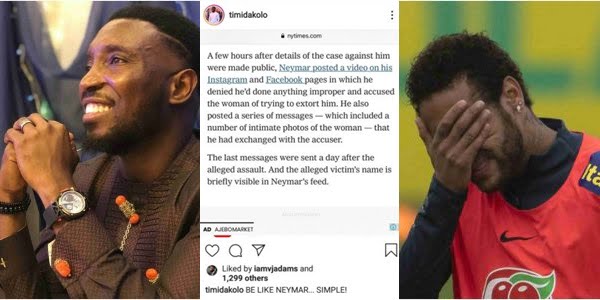 Award-winning singer, Timi Dakolo, has shared a report where Brazilian footballer, Neymar, reacted to the sexual assault allegation filed against him.

The singer called on suspected abusers to clear their name like Neymar did if they are innocent.ccused of

Neymar who was accused of rape in an effort to clear his name took to Facebook and Instagram to deny the allegations.

The PSG player also released series of messages he had exchanged with the accuser as he tried to clear his name.

“A few hours after details of the case against him were made public, Neymar posted a video on his Instagram and Facebook pages in which he denied he’d done anything improper and accused the woman of trying to extort him. He also posted a series of messages which included a number of intimate photos of the woman that he had exchanged with the accuser”.

Timi, who had earlier accused an Abuja pastor of abusing female members, called on the pastor to come out clean as Neymar did.