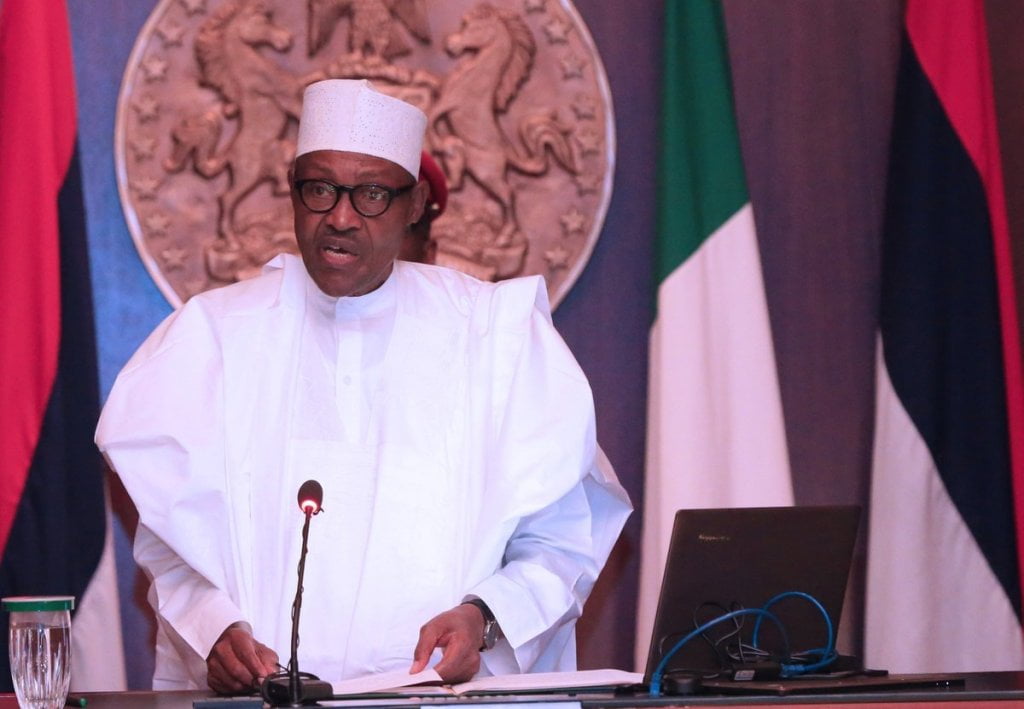 President Muhammadu Buhari on Wednesday, May 22, praised members of the federal cabinet who resigned for various reasons from the cabinet.

Naija News reports that the President made this comment at the valedictory Federal Executive Council (FEC) meeting in Abuja, Nigeria’s capital.

At the valedictory meeting, Buhari paid tribute to his late Minister of State (Labour), James Ocholi, who died in a car accident along Abuja/Kaduna expressway in 2016.

Similarly, Amina Mohammed resigned as environment minister to become the deputy secretary-general of the United Nations.

On the other hand, Aisha Alhassan resigned to contest for the governorship of Taraba. Ibrahim Jibril, a former Minister of State (Environment) resigned after he was named the emir of Nasarawa while Khadija Ibrahim left the federal cabinet to seek election as a member of the House of Representatives.

However, Kemi Adeosun was forced to resign as Minister of Finance after she was exposed to have submitted a forged NYSC exemption certificate.

Meanwhile, the President, however, directed the ministers to remain in office till Tuesday, May 28, a day before he will be sworn in for a second term as Nigeria’s president.

CLOSING REMARKS BY H.E. PRESIDENT MUHAMMADU BUHARI AT THE VALEDICTORY SESSION FOR MEMBERS OF THE FEDERAL

Today’s Federal Executive Council meeting is the last time we will meet as a cabinet before the commencement of the second and final term of this Administration.

2. Our first meeting in this chamber was in November 2015. Over the past three and a half years, we worked together to deliver our campaign promises. I strongly believe that it is this teamwork that led to the successes recorded during our first term.

3. Some of our colleagues, with whom we started this journey, unfortunately, are not here to join us in celebrating our successes.

4. Specifically, I must recognise our late brother, James Ocholi SAN who passed away in a fearful motor accident with his wife, Blessing and son, Joshua only four months after being sworn in as a Minister.

5. I want us to all put him, and indeed his family, in our memory. He was a true patriot committed to our CHANGE agenda.

6. I also acknowledge the contributions of other Council members who resigned before the completion of our tenure to pursue other opportunities. You will recall that when we started this journey, our country was facing numerous challenges.

8. We inherited a broken economy which eventually went into recession in the second quarter of Fiscal Year 2016. The situation was further compounded by insecurity and massive corruption.

9. Many would have given up. Indeed, many outside commentators said our situation was well nigh hopeless. However, we all came together and pushed forward to deliver our campaign promise to rescue our country from its parlous state.

10. Although we all had a common vision, we frequently had heated debates in this room on the best way to achieve our goals. These differing views are what made the decisions we took all the more rational.

11. It is this quality that made me retain my cabinet for the full term. Each of you in this room has a unique skill and strength. We are a reflection of the Nigeria we aspire to achieve. A diverse but tolerant nation where no one is silenced and where every opinion should be heard and considered.

12. I want you all to leave this meeting proud to have served your nation to the best of your ability.

13. You should be proud to have been part of the Government that liberated the local governments previously under Boko Haram rule.

16. You should be proud to have introduced the social investment program that enhanced livelihoods of millions of Nigerians.

17. You should be proud to have participated in settling outstanding pensions of many senior citizens abandoned by previous governments while supporting state governments to meet their salary arrears.

18. And of course, you should all be proud to have overseen the most ambitious road, rail and airport rehabilitation programs in the history of our country.

19. I want to put on record, that your achievements in the last three and a half years has guaranteed your position in the history books of this nation. You have certainly built the foundations for an improved economy and a more purposeful government.

20. Although today is our last council meeting, I expect all of you to continue working until Tuesday, 28th May 2019 when you will officially hand over your schedules to your respective Permanent Secretaries. Your handing over letters should be submitted to the Office of the Secretary to the Government of the Federation.

21. I want to conclude by thanking all of you for agreeing to serve our nation during these difficult times. I want to use this opportunity to recognise the silent partners to this cabinet, your spouses, families and friends, who supported you through these years.

22. I wish you the very best of luck and pray for your successes, for your families and our for country in the years ahead.

Thank you and God Bless the Federal Republic of Nigeria.