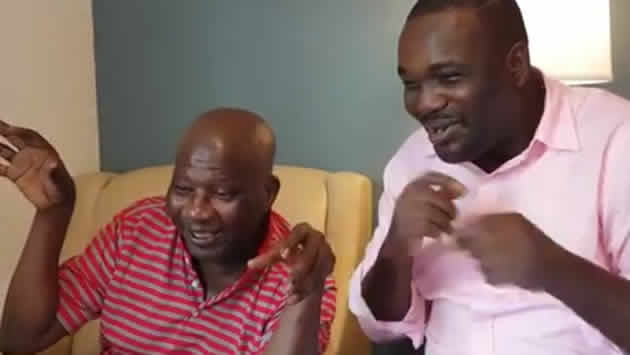 Nollywood actor, Yomi Fabiyi says ailing actor Baba Suwe is still receiving treatment in the United States and would be discharged in a couple of weeks to return to Nigeria.

Naija News had reported earlier that  Yomi, a friend to the actor and supposed spokesman, had announced that Baba Suwe travelled abroad for medical treatment on Saturday, April 20.

The actor's trip to the US came after funds were raised on his behalf to treat him after he was said to have been down with chronic diabetes.

Days after Baba Suwe embarked on the trip, rumours filtered in some quarters in the country that he had passed away in the US but the actor appeared in a video in April where he gave an update on his journey.

Like the video that emerged in April, another video has emerged where the actor could be seen in a joyous mood.

Giving an update on the actor's health, Fabiyi said: "A brief break from my movie world tour and am here LIVE with the boss and veteran actor/comedian Alhaji Babatunde Nurudeen Omidina a.k.a Baba Suwe in Province, Rhode Island, United States of America (USA).

"Thanking you all for your support, prayers and best wishes.

"Treatment still ongoing and in matter of days or few more weeks, he should be on his way back to Nigeria. Many thanks and kind Regards," he added.

Watch the video below...