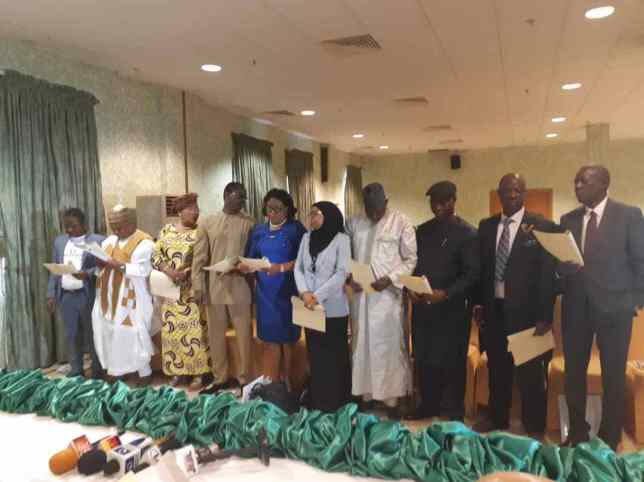 The faceoff between the Nigerian Labour Congress (NLC) and the Federal Government continued on Tuesday with a blame game over the inauguration of a new board for the National Social Insurance Trust Fund (NSITF).

While the Minister of Labour and Employment, Mr Chris Ngige, spoke on behalf of the Federal Government, NLC President, Ayuba Wabba represented the labour union.

Both appeared as guests on Channels Television’s Sunrise Daily, a day after Ngige swore in a new board for the Fund following a two-year delay.

Prior to the inauguration, NLC members last week protested against the Minister for his alleged failure to inaugurate the board of National Social Insurance Trust Fund with Frank Kokori as the chairman.

Wabba criticised the Minister for the delay in the constitution of the board, blaming the action on an alleged lack of communication between the Federal Government and the labour.

He, however, insisted that Kokori was not recommended by the labour, insisting that his appointment was based on a recommendation from the Delta State chapter of the All Progressives Congress (APC) being a member.

“We are social partners in this particular issue. It’s a labour market institution. We shouldn’t wait until the 11th hour. Labour should have been informed. Even him Kokori should have been informed.”Even up to now, there is no formal communication to him. After the Minister invited him to his house and had dinner to say you have been appointed, there is no formal communication to labour.

“The issue of Kokori’s appointment was not the issue mainly, it was inaugurating the board. So clearly speaking, there is a breakdown in communication. That communication which was made public to Nigerians only came at the eve of the inauguration two days ago,” he stated.

But reacting to the allegation, the Minister accused the NLC President of being economical with the truth.

According to Ngige, Wabba came to his office claiming that the Vice President had instructed the NLC to bring a nomination.

“I did not recommend Mr Kokori for an appointment. The NLC President is being economical with the truth. I told them that this name you people have inserted is an invalid nomination.”It was on that basis that I asked Mr Kokori to give me his Curriculum Vita (CV). As a matter of fact, this NLC President came to my office and lied to me that the Vice President asked them to bring a nomination.