The African Action Congress, AAC has brought to public notice, the evidence of Query and suspension letters issued to Dr. Leonard Ezenwa, the arrowhead of a faction of the party responsible for ‘suspending’ Omoyele Sowore, a former Presidential Candidate of the Party.

According to the Query letter, Ezenwa was accused of Anti-Movement and Anti-party activities, Non-participation in party activities, setting up parallel structures in other states, refusal to update signatories to the party account among other offences.

Both letters were signed by the Deputy National Chairman of the Party, Mr. Malcolm Fabiyi.

Responding to the letter, Dr. Ezenwa described the disciplinary actions against him as ‘Dubious’ adding the Malcolm Fabiyi was not the leader of the party.

Earlier, The national executive committee (NEC) of the party had suspended Sowore over his alleged involvement in anti-party activities, financial misappropriation as well as failure to convene NEC meeting.

Naija News reports that Sowore, swiftly after news of his suspension,  suspended top members of the party and expelled Nzenwa, describing those suspended as “misguided individuals”.

See Details Of The Suspension as published by Politics Nigeria 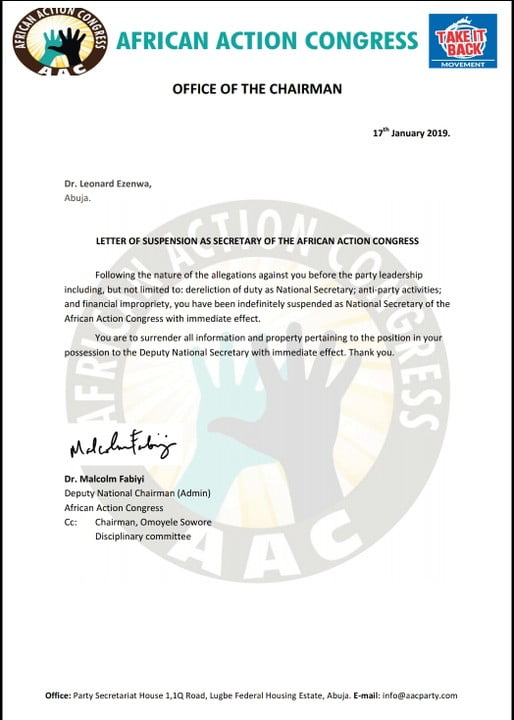