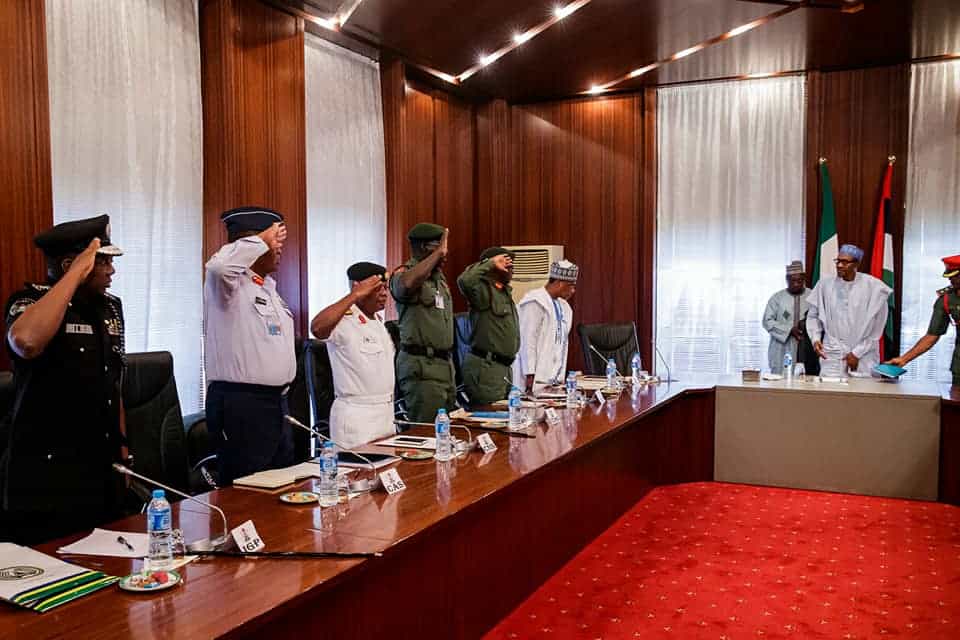 Following the recent tolls of attacks, killings and kidnaps that have prevailed across the country, President Muhammadu Buhari has given service chiefs and other heads of security agencies marching orders to end the killings.

Naija News earlier reports that this the second time in the week that the President will call this type of meeting in respect to rising cases of banditry and kidnapping among other security challenges facing the country.

Buhari had on Tuesday received a briefing from the security chiefs at the Presidential Villa, Abuja.

President Buhari today ordered them to ensure that Nigerians go to bed confident that their security is guaranteed.

Chief of Naval Staff, Rear Admiral Ibok Ekwe Ibas, stated this while briefing State House correspondents on the outcome of the meeting which started at 11:30 am and ended shortly before 3 pm.

Admiral Ibas noted that the meeting “was just basically to brief Mr. President of the security situation after his short vacation abroad. The security agencies briefed him on what has been happening with particular emphasis on the proliferation of small arms and what various agencies are doing to curtail the consequences of this proliferation.

“He has also given directives that the agencies should do much more to ensure that Nigerians go to bed and wake up feeling healthy and confident that their security is guaranteed.”

On kidnapping which is on the increase, the Naval Chief said: “You will recall during the last meeting, the IG was directed to ensure that insecurity is addressed and consequently various operations were set up. Puff Adder was one of the strategies. With the set up of that operation, there has been a remarkable drop in the number of kidnappings. What normally would attract attention is when a key person in government perhaps is kidnapped. On the whole, the number of kidnappings has dropped and generally I think the security situation is improving.”

On the kidnapped District Head of Daura, Alhaji Musa Umar, Ibas disclosed that two suspects had been arrested.

He said: “Serious efforts are being made, key suspects have been arrested and it is hoped that in a short while, those behind the heinous crime will be brought to book.”

The Secretary to the Government of the Federation, Boss Mustapha, and Minister of Interior, Lt. Gen. Abdulrahman Dambazzau were also present at the meeting.