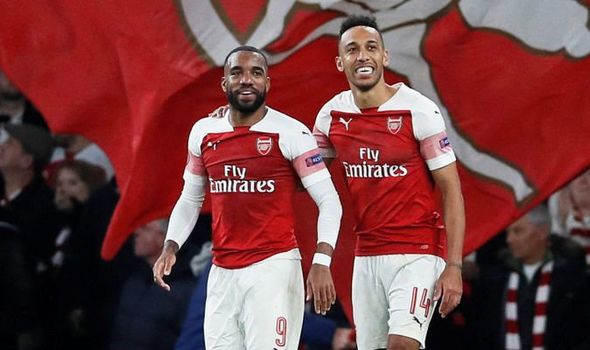 Pierre Aubameyang’s hattrick has placed English Premier League side Arsenal, one win away from returning to the UEFA Champions League.

Three goals from Aubameyang and one from Lacazette, who between them have 10 of Arsenal’s last 13 Europa League strikes, mean that Arsenal will be in Baku, 4,230km from here.

That also means Arsenal manager Unai Emery will be in another final: this was his 19th consecutive Europa League tie without elimination.

He had not been knocked out since a semi-final here in 2012.

The Spaniard talked of the importance of Arsenal trying to win a third European title in their history; if they do, he will win his fourth.

Valencia took the lead in the first leg and Marcelino’s men did so again in the return at the Mestalla, with Gameiro on target in the 11th minute.

Arsenal swiftly responded, though, as Valencia failed to deal with a Petr Cech long ball and Lacazette flicked on for his strike partner, Aubameyang, to brilliantly slot past Neto.

Lacazette also got on the score sheet when he collected a Lucas Torreira’s pass, turning neatly into space and rifling across Neto to make it 5-2 on aggregate to Arsenal.

Gameiro grabbed his second of the game, which saw the striker bundle past Cech after inadvertently blocking an effort from Daniel Wass, reduced the arrears but Aubameyang had the final say.

Maitland-Niles brilliantly skipped clear on the right wing and Aubameyang got ahead of his man to turn home a near-post finish, before his 29th goal of the season in all competitions secured the match ball, with Valencia tempers spilling over at the full-time whistle.

Arsenal will now take on EPL rivals Chelsea in an all English Europa League final.