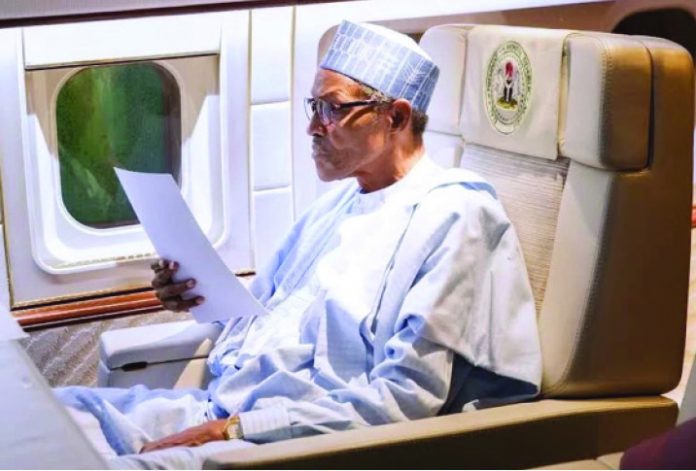 Why Buhari Visited The United Kingdom On Previous Occasions

While it has not yet been revealed, the cause for President Muhammadu Buhari‘s ‘private visit’ to London, media reports show that it is the 11th time in four years, the President is traveling to the United Kingdom.

Naija News had earlier reported that the president will be traveling to London on a “private trip” to return on May 5.

Although his last trip to the UK was about eight months ago, the president’s visits to the UK have been mostly for a medical reason.

Here are the 10 times Buhari has been to the UK.

Naija News reports that eight months into his tenure, Buhari on February 5, 2016, traveled to the UK for his first vacation. He returned to the country on February 10, 2016.

On the Second occasion, the President left for the UK on May 13  and returned May 15, 2016. It was during then he attended the first-ever anti-corruption summit in the United Kingdom.

The summit attracted various heads of state from around Africa. The summit was vital to getting international support anti-corruption and terrorism for Nigeria.

On June 6, 2016, Buhari left Nigeria for his first medical vacation. Buhari took a 10-day medical trip to London to treat an ear infection. He extended his trip by 3 days to rest. He returned from that journey on June 19, 2016.

On January 19, 2017, the President traveled to the UK on medical leave and returned on March 10 after spending 51 days out of the country.

40 days after, Buhari traveled to the UK for medical attention on May 8, 2017, and remained there till August 19, 2017, spending 104 days, a record which surpassed that of the late President Umaru Yar’Adua.

Buhari was in the UK for 13 days from April 9 to 21, 2018 for his annual leave. He participated in the Commonwealth Heads of Government Meeting and also met with the British Prime Minister, Theresa May.

On May 2 to 4, Buhari had a “technical stopover” as Presidency reported, at the UK from a trip from the US after a meeting from US President Donald Trump.

Buhari had left the American capital on the morning of May 1 and arrived at the presidential wing of the Nnamdi Azikiwe International Airport, Abuja at about 10:35 pm on May 4, 2017.

Four days after returning to Nigeria, Buhari returned to the UK for medical reasons on May 8, 2018, and he returned on May 11.

The president traveled to London on a working leave on August 3, 2018, and returned on the 18th of the same month, spending a total of 16 days

However, As Nigerians wait eagerly for the ‘private reason’ for Buhari’s ‘Private Visit’ to London, there are speculations that he traveled for health reasons.

Reno Omokri, a regular critic of the President took to his verified Twitter handle, @renoomokri to speculate that the President should do his ‘private visit’ in Nigeria.

We know what "private visit" means. We are not fools. Only yesterday, your minister of Labour told us 'Nigeria has more than enough doctors'. Why not prove him right by doing your "private visit" in Nigeria?#FreeLeahSharibu #RenosDarts https://t.co/PnRiFAHyKs