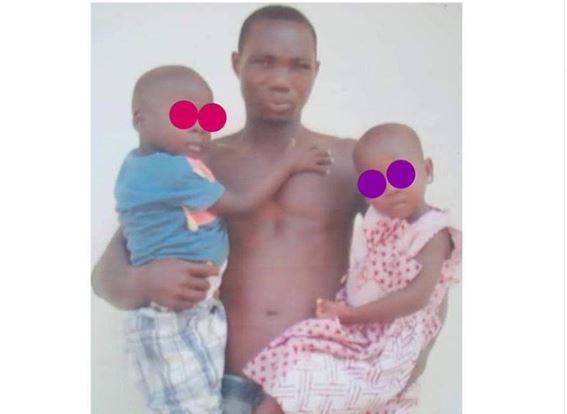 A 30-year-old man identified as Edet Essien Inyang, has been arrested for attempting to sell two of his children in Cross Rivers.

Naija News understands that Edet attempted to sell his male and female children in a deliberate attempt for him to escape poverty.

Edet was said to have taken his children, one male and another female to Murray Street where he sought buyers to enable him to raise money for his survival.

According to an eyewitness identified as Ekem, Edet came to his street to seek after a rich man and was told that the rich man was not around. Ekem said he further went ahead to ask what he wanted to see the rich man for while he (Edet) was alleged to have said that he was looking for a rich man to sell his two children to since he could no longer feed them stresslessly.

Ekem said he attracted the attention of residents in his area, held Edet and appealed to him that they were calling a rich man to buy his kids.

Unknowing to Edet, Ekem contacted the Police and handed him over to the operatives of the Atakpa Police Station.

“He came here with the children and asked after one rich man on this street and when he did not see the man, we asked him what he was looking for the man for and he said was looking for someone to buy his two children.

” We delay him while making efforts to contact the Police at Atakpa Police Station which is close-by, and immediately sent a team to arrest him.”

“He said he is from Akwa Ibom State but resides in Using Inyang,” Ekem added.

Edet had since been arrested and transferred to the State Criminal Division at the Police Command headquarters for further investigations and possible prosecution.