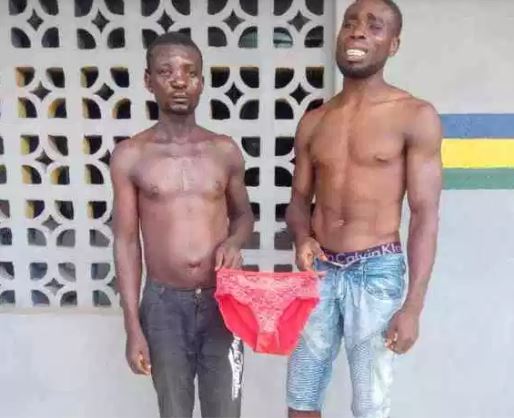 Operatives of the Satellite Division of the Lagos state police command have apprehended two males for stealing female panties for the alleged purpose of rituals.

Naija News understands that the suspects; Friday Emmanuel, 21 and Obiora Nwabueze, 29, were apprehended on Saturday under the Mile-2 bridge in Lagos.

The suspects were apprehended when an argument ensued between them as one of them couldn’t keep to the agreement of stealing the female panties.

The Police Public Relations Officer, Bala Elkana confirmed the arrest of the suspects and said they were apprehended through the intelligent response of the Police.

Upon interrogation, Emmanuel said Nwabueze tasked him to steal used female pants for a fee of N30,000, saying that after he had successfully accomplished the task, he reneged on his promise and forcefully attempted to take the pants from him which led to an exchange of punches.

Emmanuel said he regretted listening to his friend, who was pestering him on the need to get the female panties to desperately become rich.

Both suspects were on Wednesday, April 24 charged to Magistrate Court 23, at Mbah road, Ajegunle, Lagos on a two count charge bordering on conspiracy and stealing.