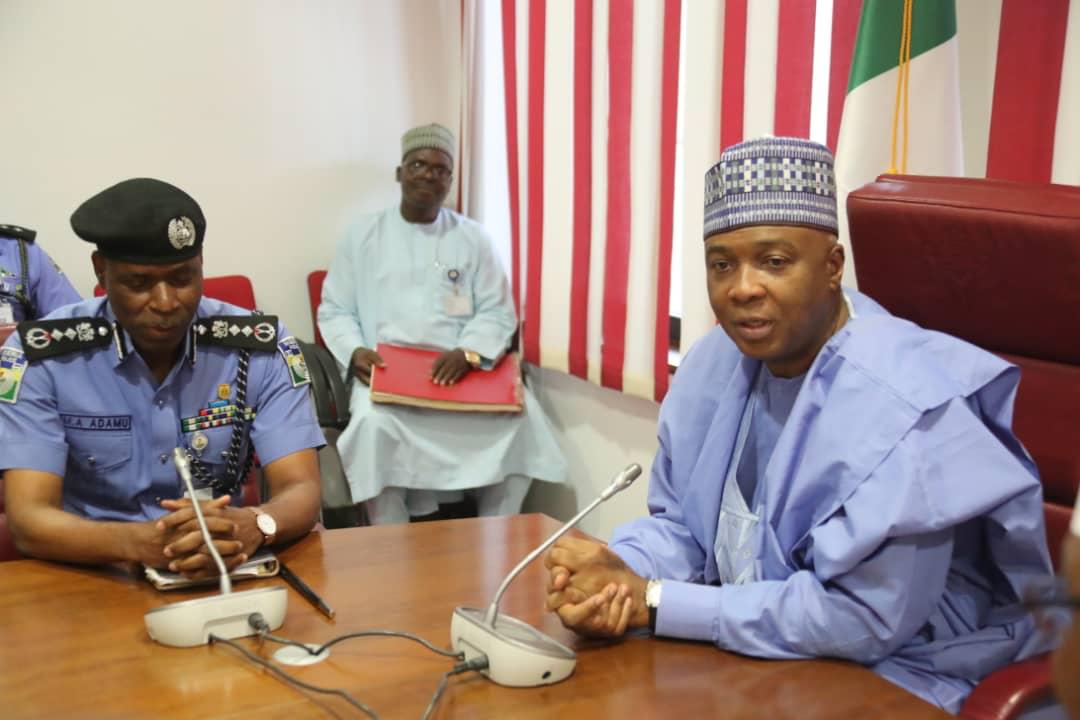 Senate President Bukola Saraki on Wednesday met with the Inspector General of Police (IGP), Mohammed Adamu, to discuss on the Police Reform Bill and the Police Trust Fund Bill.

This was made known in a statement by Saraki’s Special Assistant on New Media, Olu Onemola.

Speaking during the meeting, Saraki restated the National Assembly’s commitment to strengthen the nation’s security architecture, while emphasising that both the Police Trust Fund Bill and the Police Reform Bill, which are at various stages in both chambers of the 8th National Assembly, would help to bequeath a more effective and efficient Police Force to the country.

Saraki said: “The performance of the Nigeria Police is key to our nation’s security. This is because apart from us ensuring that the institution is well-funded, we need to ensure that the Police plays its Constitutional role in the security of our nation. Across party lines, the police can be reassured of our support to strengthen it as an institution.

“Funding is a major issue, and I know that a lot of work has been done to ensure that the Police Trust Fund Bill get to its current stage in the House. Before the end of the 8th Senate, I want to assure you that we will pass this Bill.

“Another critical issue is the Police Reform Bill which has gone through Public Hearing with major input from stakeholders. We started this process before your tenure, but we can still allow a few more days before it is laid so that you too can make your contributions.

“We would like you to take a close look at this Bill alongside the Committee so that by next week, we can lay the Report of the Bill and pass it. Once we begin to address the issue of funding and institutional reform of the Police, many of the recent incidents that we have seen like the abductions yesterday on Abuja-Kaduna road, and the killing of the young man in Lagos, will also be addressed.”

Also speaking earlier, Inspector General of Police stated that the passage of the Police Trust Fund Bill, which has been passed by the House of Representatives and is still being considered by the Senate, remains a priority as the 8th Senate winds down its activities.

“The security challenges in the country are so high, however, the resources are limited. It is our view that the passage of the Police Trust Fund Bill would assist in strengthening the institution and alleviating many of the challenges that we face,” the Adamu said.