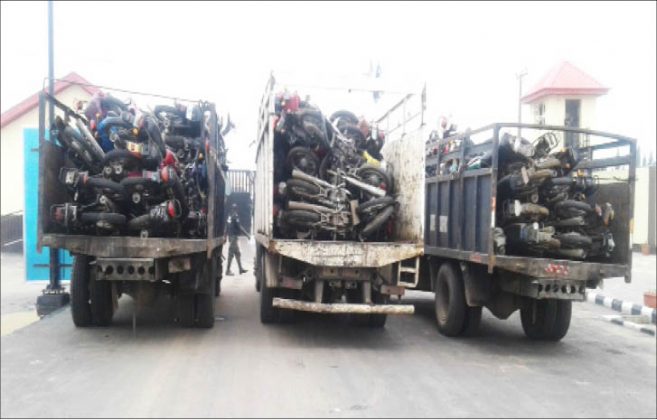 The Lagos State Special Taskforce has seized 109 motorcycles at Second Rainbow, along Oshodi-Apapa Expressway for flaunting the state Traffic Laws.

This is just as the agency disclosed it would destroy over 2,500 motorcycles impounded since January for plying restricted routes across the state.

These were contained in a statement released by the agency’s head of Public affairs Taofiq Adebayo on Sunday morning.

According to Adebayo, the Taskforce Chairman Olayinka Egbeyemi, said a Chief Superintendent of Police (CSP) at the weekend led operatives to the Second Rainbow in Amuwo Odofin Local Government Area (LGA) of the state.

READ ALSO  FG charges Misau to court over "injurious falsehood" against IGP, others

In his words, Adebayo said; “While some of them harass innocent members of the public at various bus-stops, others engage in all sorts of criminal acts by dispossessing their passengers of valuables such as phones, jewellery, and bags. Also, motorists held in traffic both morning and night around these areas were not spared,” Adebayo stated.

“The chairman warned dispatched riders using power bikes (200cc above) to desist from engaging in illegal commercial activities as anyone caught violating Lagos State Traffic Laws would be prosecuted.

“He urged various motorcycle riders associations across the state to on regular basis, educate their members on all 475 restricted routes and the life-threatening danger surrounding plying high-ways and bridges.

“The chairman, however, confirmed that over 2500 illegal commercial motorcycles impounded by the agency in the last three months (January to March 2019) would be crushed by the government,” said Adebayo.