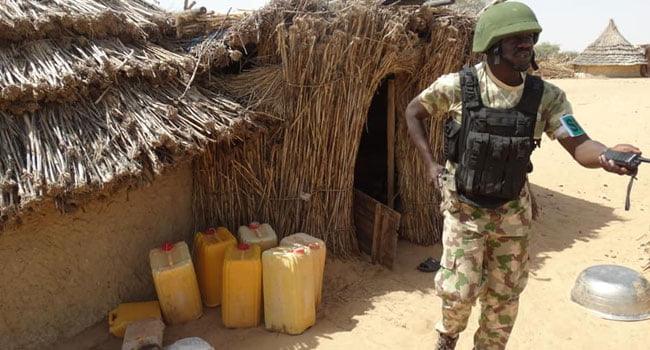 The MNJTF Chief of Military Public Information, Colonel Timothy Antigha, disclosed this in a statement on obtained by Naija News on Friday in N’Djamena, Chad.

Naija News understands that the soldiers also arrested three suspects while three other suspects surrendered to troops in Cameroon.

“Troops of the MNJTF and national forces operating in Doro Naira and Ngolom environs made contact with Boko Haram terrorists and at the end of the engagement, five terrorists were killed, three captured, while others fled,” Colonel Antigha revealed.

He added that; “Two out of the three captured terrorists were eventually killed when the vehicle conveying them went over a roadside bomb planted by Boko Haram themselves. Tired of waiting for the unrealised Boko Haram Caliphate, three Boko Haram terrorists have surrendered to troops of MNJTF Sector 1 in Balgaram, Cameroon.”

The spokesman re-emphasised the task force’s commitment and determination to deal with the violence orchestrated by Boko Haram insurgents in the Lake Cha.

While highlighting some of the feats made, by the force, he said; “MNJTF troops operating around Damasak, Garunda and Gazabure localities destroyed a vehicle smuggling petrol and other logistics for Boko Haram.”