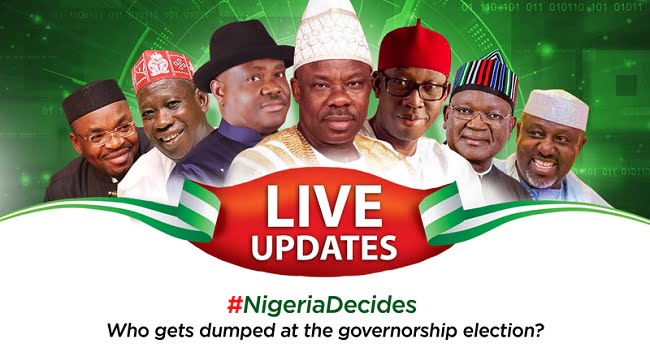 The Independent National Electoral Commission (INEC) on Sunday started the announcement of the results of governorship and state Houses of Assembly elections held in the country on Saturday.

The results released so far revealed some surprises and upsets across the country. For instance, the ruling All Progressives Congress in Oyo State lost the governorship poll to the Peoples Democratic Party. The APC candidate, Adebayo Adelabu, backed by the incumbent Governor Abiola Ajimobi, lost scandalously to his PDP’s counterpart, Seyi Makinde, with a margin of 157, 635 votes. While Makinde polled 515,621 votes, Adelabu came second with 357,982 votes.

Also, as it was during the February 23 presidential and National Assembly elections in Kwara State where the incumbent Senate President, Bukola Saraki, lost his bid to return to the Senate, his party lost all elective positions in the March 9 polls.

The Kwara State APC governorship candidate, Abdulrahman Abdulrazak, swept the poll to beat his PDP counterpart, Abdulrazak Atunwa, with a margin of 216,792 votes.

Also, the APC governorship candidate in Lagos State, Babajide Sanwo-Olu, won a landslide victory over his closest rival, Jimi Agbaje of the PDP. Observers had expected Agbaje to give Sanwo-Olu a run for his money, but this was not to be as the political machinery of the national leader of the APC, Bola Tinubu that backed the new comer was too much for Agbaje.

However, INEC had declared winners in some of the 29 states where the governorship poll was conducted on Saturday as of the time of filing this report this morning. These states include Lagos, Kwara, Gombe, Enugu, Oyo, Abia, Kebbi, Jigawa, Katsina , Ogun, Akwa Ibom, Ebonyi and Niger.

Other states where the results have not been fully released include Benue, Nasarawa, Sokoto.

Punch reports that the results so far declared have stirred protest as opposition parties in some states rejected the outcome citing vote-buying, supporters’ harassment and alleged bias by the electoral umpire and the security agencies as reasons.

INEC on Sunday declared the APC candidate, Sanwo-Olu, as the winner of the March 9 governorship election held in the state on Saturday.

Sanwo-Olu, who scored 739,445 out of the 977,476 total valid votes in the election, defeated 44 other candidates to emerge as the governor-elect in the state.

In Kwara State, the APC governorship candidate, Abdulrazaq, has been declared the winner of the governorship election.

Declaring the results of the poll on Sunday, the state Returning Officer and Vice-Chancellor of the Federal University, Lafia, Nasarawa State, Prof. Muhammad Liman, said Abdulrazaq polled 331,546 votes to emerge as the winner of the election.

His PDP counterpart, Atunwa, polled 114,754 votes to emerge as the runner-up.

Also, the PDP’s candidate in Oyo State, Makinde, was declared elected by INEC’s Returning Officer, Prof. Oluwatoyin Ogundipe, having polled the highest number of votes in the election.

Ogundipe is the Vice Chancellor, University of Lagos.

Meanwhile, out of the 32 seats in the state House of Assembly, the PDP won 25 seats, the APC secured five seats while the Action Democratic Party got one.

Meanwhile, the governorship candidate of the APC in Ogun State, Dapo Abiodun, has emerged winner of the 2019 governorship.

The Returning Officer, Prof. Idowu Olayinka, who announced the result and declared Abiodun winner, said the APC governorship candidate polled 241,670 votes to defeat the candidate of the Allied Peoples Movement, Adekunle Akinlade, who scored 222,153, leaving a margin of 19,517 votes.

In Enugu State, the incumbent Governor Ifeanyi Ugwanyi of the PDP also won his re-election bid as he beat his opponents to win the governorship poll. Ugwuanyi cleared all the 17 Local Government Areas results.

The results was announced at the state Collation Centre for the 2019 governorship election by the Collation Officer for Governorship and State Assembly Elections, Prof. Hamisu Bichi, on Sunday in Birnin Kebbi.

The INEC Returning Officer in the state, Prof. Saminu Abdulrahaman, who declared the result in Gombe on Sunday, said Yahaya scored 364,179 votes to defeat his closest rival of the PDP, Usman Nafada, who polled 222,868 votes and was returned elected.

The candidate of the PDP in Abia State, Okezie Ikpeazu, has been declared the winner of the governorship election in the state.

INEC’s Returning Officer, Prof. Benjamin Ozumba, who is also the Vice-Chancellor of the University of Nigeria, Nsukka, declared him winner after polling 261, 127 to defeat his closest rival and candidate of the APC, Uche Ogah, who garnered 99,574 votes.

He also announced that the candidate of the All Progressive Grand Alliance, Alex Otti, polled 64, 366 votes to come third in the election.

Meanwhile, the incumbent Governor of Jigawa State, Alhaji Muhammad Badaru, has won the governorship election in the state.

The Returning Officer for the governorship election in Jigawa, Prof. Azubike Nwankwo, who is the Provost, Nigeria Defence Academy, Kaduna, declared the result in Dutse on Sunday.

Nwankwo said Badaru, of the APC, was returned elected with 810, 933 votes to beat his closest rival, Alhaji Aminu Ringim of the PDP, who scored 288, 356 votes, followed by Alhaji Bashir Adamu of the Social Democratic Party, who got 32,894 votes.

Meanwhile, the governorship candidate of the PDP in Akwa Ibom State, Governor Udom Emmanuel, has been re-elected for a second term in office.

Emmanuel secured 519,712 votes and won in the 30 LGAs in the governorship results announced by INEC, while his closest rival and candidate of the APC, Mr Nsima Ekere, garnered 171,978 and won only in Essien Udim, which is the LGA of the former Senate Minority Leader, Godswill Akpabio.

Declaring Emmanuel winner at 12.30am on Monday, the state Returning Officer, Prof. Faraday Osasere, the Vice-Chancellor, University of Benin, Benin, Edo State, said out of the 2,119,727 registered voters in the state, only 720,064 were accredited for the election, while the total vote cast was 712,037.

Also, the Niger State Governor, Abubakar Bello, who contested for a second tenure on the ticket of the APC, has won the bid, according to the results of the Saturday polls announced by the Returning Officer, Prof. Angela Freeman-Mary.

Freeman-Mary, the Vice-Chancellor of the Federal University, Lokoja, Kogi State, who announced the result on Sunday in Minna, said Bello won the polls in all the 25 LGAs of the state.

Governor David Umahi of Ebonyi State of the PDP has been declared the winner of the state governorship poll.

According to the result, Umahi polled 393,043 votes to defeat his closest rival, Sonni Ogbuoji of the APC who polled 81,703 votes to emerge the winner.

The Katsina State Governor, Aminu Masari, has won the governorship poll in all the 34 LGAs of the state announced by INEC on Sunday.

Masari, a former Speaker of the House of Representatives, sought re-election for another term of four years on the platform of the APC last Saturday.

In the results announced by the State Returning Officer, Prof. Abdullahi Zuru, the APC scored 22,482 votes in Dutsi Local Government Area, while the PDP came second with 10,564 votes.

In Nasarawa State, the APC candidate in the governorship election, Abdullahi Sule, has been declared the winner by INEC.

“The election was keenly contested by different candidates and Ifeanyi Arthur Okowa of the PDP polled a total number of 925,274 votes to defeat his first runner up, Chief Great Ogboru of the All Progressive Congress who polled a total of 215,938 votes.’’

The INEC has declared the All Progressives Congress (APC) governorship candidate in Zamfara state, Mukhtar Shehu as the winner of last Saturday’s election.

According to the Returning Officer in the state, Prof. Kabiru Bal, the APC candidate polled 534,541 to defeat his closest rival, Dr Bello Muhammad Mutawalle of the Peoples Democratic Party (PDP) who got 189,452.

The candidate of the PDP Ben Ayade has won the governorship election in Cross Rivers State held on Saturday.

According to the Independent National Electoral Commission (Inec), Ayade had 381,484 and also won all 18 local government areas of the state.

The APC governorship candidate, Prof. Babagana Umara Zulum was on Monday declared the winner of the election in Borno State.

He swept aside 31 other contestants, polling 1,175,440 votes to beat his closest opponent, Alhaji Mohammed Imam who garnered 66,115 votes.

He polled 273,404 votes to defeat 69 other candidates including his closest rival, Uche Nwosu of Action Alliance who scored 190,364 votes.

Governor Darius Ishaku of Taraba has been declared the winner of Taraba governorship polls.

The INEC returning officer of the state, Prof. Shehu Iya said Ishaku of the Peoples Democratic Party (PDP) having scored the highest votes of 520,433 was returned and declared reelected.

He added that Ishaku defeated his close rival Alhaji Sani Abubakar of the All Progressive Congress (APC) who polled 362,735 while Sen. Aisha Alhassan of the United Democratic Party (UDP) polled 16,289 to come third.