Two bullion vans have been reportedly spotted entering the Bourdillon residence of Bola Tinubu, the National Chairman of the All Progressives Congress (APC), Nigeria’s ruling party.

Naija News reports that the development is coming few hours to the Presidential election which will be conducted by the Independent National Electoral Commission (INEC).

A picture which has gone viral on the micro-blogging site, Twitter, showed some people queuing at the entrance to Tinubu’s home with the bullion vans moving in.

Naija News could not verify if the picture in circulation which shows bullion vans entering the home of the APC National leader is a recent one. 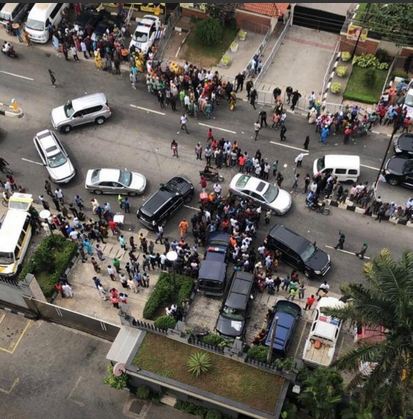 Meanwhile, President Muhammadu Buhari, who is running on the platform of the APC, Tinubu’s party, is seeking a second term in office, while Atiku Abubakar of the Peoples Democratic Party (PDP) is hoping to unseat him when Nigerians go to the poll later today.