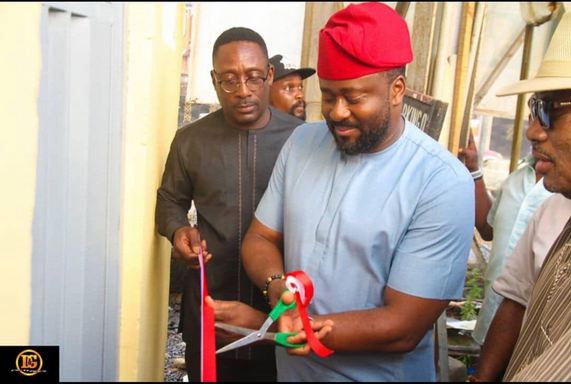 Naija News had reported earlier that the public Biofil toilet which will convert waste to manure was commissioned on Wednesday, February 20. The actor shared the news on Instagram on Thursday, February 21.

Elliott, who is seeking a second term in office on the platform of the All Progressives Congress (APC), Nigeria’s ruling party, said the project was sponsored by the Australian government.

The actor said his sincere thanks and gratitude goes to Hon Com Ladi Lawanson for making the Biofil toilet a reality.

“This isn’t just a building, not is it just a toilet, but one that converts waste to manure so nothing is wasted as we keep the environment clean.

“Sincere thanks and gratitude goes to Hon Com Ladi Lawanson for making this Biofil toilet a reality. The Australian government for sponsoring the project. Bar Iraboh for making it happen. Entire Gbaja community especially the CDA chairman Alh Seriki for the land and being an example to us all the entire Surulere”.

Moments after the news broke, Nigerians took to the micro-blogging site, Twitter, to blast the lawmaker.

Lesson: Don't give positions of authority to people based on their age. Age, whether old or young, isn't one of the characteristics of a good leader. pic.twitter.com/hVrREyL5KD

If you want to be made useless in life join @APCNigeria

People like Desmond Elliot is the big part of the reason we doubt these new generational not too young to run politicians. They are mostly younger versions of the old ones. Man is smiling and commissioning toilet.
Tufia

Very toxic, horrid and vile people on Twitter. Quick to pull others down.

Desmond Elliot didn't build the toilet..It was donated to his constituency in conjunction with the Australian high commision.

Why the eagerness to pull the man down? pic.twitter.com/4K1BjRq451

Hope Desmond Elliot pooed in that toilet as part of the commissioning?

I knew Desmond Elliot was going to trend, but how could it be only toilet he commissioned in 4 years, I don't want to believe it

Desmond Elliot commissions toilet.
So that Apc people will see where to shit when they start purging ???

Not too young to run.
???
To Run and Goan shiit

One would have thought Desmond Elliot would do better but here we are.

Whenever we say youths being in government will bring better change, I'm always skeptical. Just look at Yahaya Bello – a nuisance. Then look at Desmond Elliot – you would have thought he'll have better sense. Commissioning a toilet? The world has left us behind.

We wanted not too young to run bill

We wanted more youths in governance