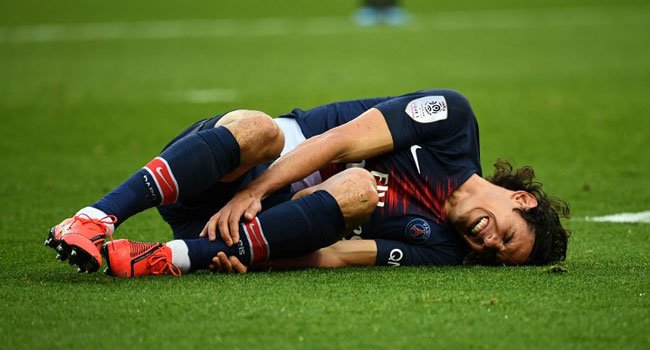 Cavani react after getting injured during the French L1 football match between PSG and FC Girondins de Bordeaux at the Parc des Princes stadium, in Paris, on Saturday, February 9, 2019. ANNE-CHRISTINE POUJOULAT / AFP

Manchester United have been handed a huge boost ahead of their crunch Champions League clash with Paris Saint-Germain, with striker Edinson Cavani set to sit out through injury.

Naija News, however, recalls that the reigning French champions are already without the world’s most expensive player Neymar, who is battling for fitness after a re-occurrence of a foot injury which plagued him last season. Cavani may now increase the woes of PSG, after recently picking up a thigh injury during a recent Ligue 1 clash with Bordeaux.

Cavani sustained the injury scoring a penalty late in the first half of PSG’s 1-0 win against Bordeaux on Saturday. He limped off the field before the half-time whistle.

Mbappe + Di Maria, it should be enough.

PSG said Cavani’s length of absence and treatment will be assessed in the next few days. PSG face United in the return leg of their last-16 match on March 6, with some French media reporting that Cavani will be out for one month.

Cavani is PSG’s all-time leading scorer with 192 goals, including 22 this season. His absence is another major blow for PSG coach Thomas Tuchel, with Neymar out for another two months because of a right foot injury.

PSG’s injury list grew further with right back Thomas Meunier also ruled out of tomorrow’s game with a mild concussion. He clashed heads with Bordeaux’s François Kamano when they contested a header on Saturday.

PSG said that Meunier must observe a period of rest until his next consultation with a neurologist at the end of the week.

PSG also go to United with doubts over whether key midfielder Marco Verratti should start the game, having played barely one hour against Bordeaux after recovering from a sprained ankle.