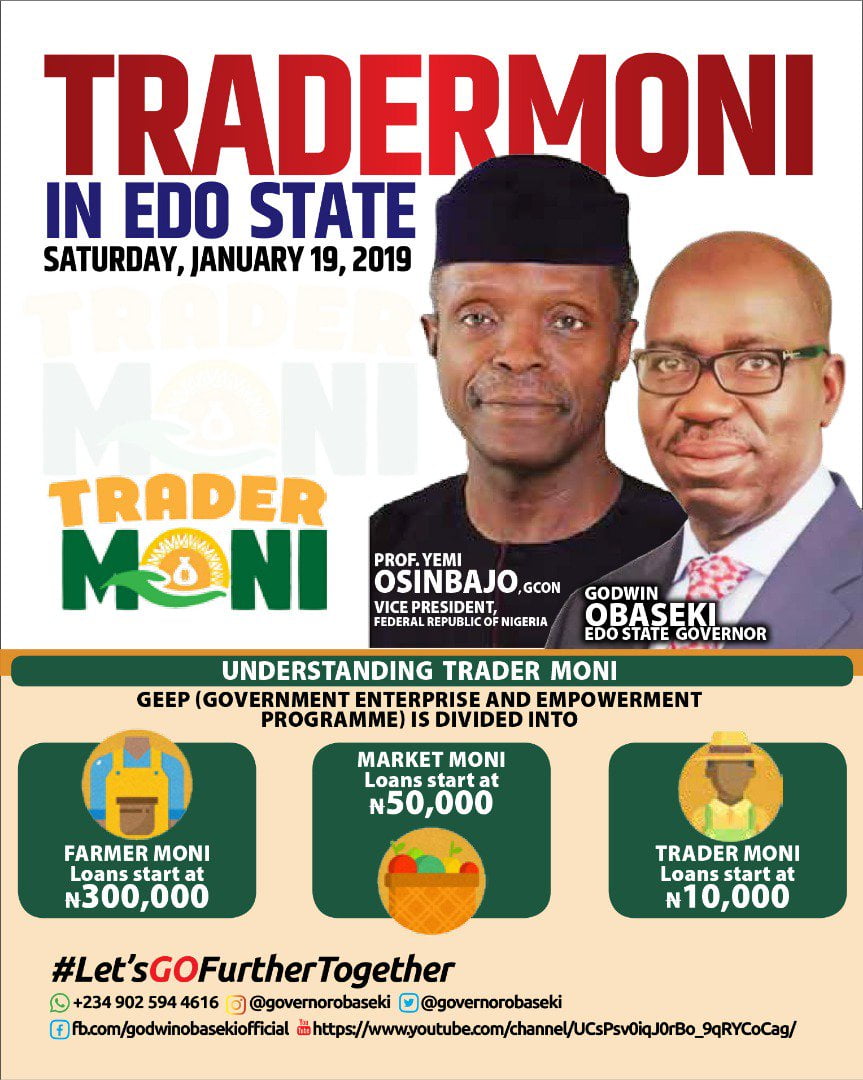 The Edo State Governor, Mr Godwin Obaseki, has said that the state is set to receive the Vice President, Professor Yemi Osinbajo, on Saturday, January 19, for the launch of one of the components of the Federal Government’s Social Investment Programme (SIP), TraderMoni,Naija News Understands.

I and other members of the state exco are awaiting the arrival of Vice President, Prof. Yemi Osinbajo (@ProfOsinbajo), who will be launching the @Trader_Moni initiative and flagging-off of the construction of the #BeninAbraka Road.#LetsGOFurtherTogether#EdoWelcomesOsinbajo pic.twitter.com/1Qij3SrwBt

In a statement, Special Adviser to the Edo State Governor on Media and Communication Strategy, Mr. Crusoe Osagie, said that the state government has concluded arrangements to host the vice president, who is a regular visitor to the state.

“The state government has made all necessary preparations for the vice president’s visit to the state, which is for the launch of the TraderMoni initiative under the Federal Government’s Social Investment Programme.

“This is a programme targeted at traders to provide them with soft loans for trading so they can take care of their families. As a government that is committed to the welfare of the people, the All Progressives Congress (APC) is bringing this initiative to the people and providing traders with the much-needed support.

He said that Governor Obaseki had earlier announced that at least 20,000 traders will benefit from the funds in Edo State, adding that the state government and the federal government are in synergy on the disbursement of the fund across markets in the state.

Noting that the state government has gained immense support from the Federal Government on a number of its programmes and projects, the governor’s aide said, “We are happy that this initiative is finally coming to Edo State, so that our people can benefit. At the same time, we have gained from the President’s favourable disposition to the state.

“These gains include the approval of a Marine Post for the Benin River Port, which has also received the President Buhari’s nod.“The Benin Industrial Park and Free Trade Zone is also another feat that enjoys the support of the President. So we have all the reasons to support the re-election of the president and his vice, come February 16.”