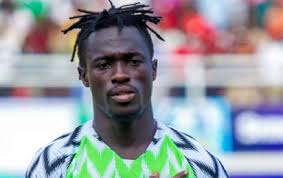 Lokosa Signs Two And Half Years Deal With Esperance

Lokosa, previously played for Nigerian club, Kano Pillars and joins a list of Nigerian players who have laced their boots for the Tunisian club.

The 25-year old Lokosa has already been capped by the national team, making his debut in a Super Eagles friendly game against the Democratic Republic of Congo last year.

Naija News reports that the player has already been unveiled by his new club and may soon get his chance on the field.

Esperance are currently leading the table in the 14-team Tunisian league with 29 points from 12 matches played so far this season.

The Tunisian side will take on FC Platinum of Zimbabwe on Friday in the CAF Champions league group stage tie and Lokosa may make his debut for the club in the game.

Chelsea Reach Agreement With Juventus Over January Transfer Of Higuain

Juve Will Win Serie A; No Top 4 For Arsenal…Prophet Aduroja Releases 2019 Prophecies In Sports