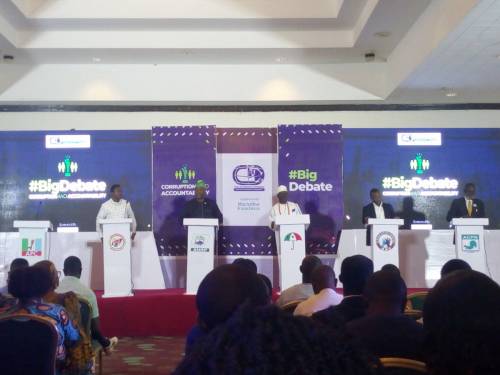 President Muhammadu Buhari, the candidate of the All Progressives Congress (APC), is not present in person nor by proxy at the Big presidential debate.

The Big Presidential Debate, which is ongoing at Sheraton Hotel, Abuja, had representatives from all the other political parties invited, except the APC.

The debate, which focuses on “Corruption and Accountability” is hosted by the Centre for Democracy and Development (CDD), and sponsored by MacArthur Foundation.

Present at the debate are the presidential candidates of African Action Congress, and Abundant Nigeria Renewal Party, Omoyele Sowore and Tope Fasua.

Kazeem Afegbua, a spokesperson of the Peoples Democratic Party (PDP) campaign and spokesperson to Ibrahim Babangida, former head of state, represented the party at the debate.

Recall that as earlier reported by Naija News, the APC, through its publicity secretary, Mallam Lanre Issa-Onilu, noted that the President attending a Debate is no big deal. There is nothing special about any debate. It is just one of the several platforms to engage the electorate” Onilu Said on Sunday.

Fellow Nigerians, please let’s join hands to remind His Holiness @MBuhari that the 2019 Presidential debate is scheduled for January 19, 2019. He should come and tell us what he has done for Nigeria. He should come and showcase his ‘integrity and competence’.

Meanwhile, Atiku Abubakar of the PDP has also been absent from all debates — but has delegated proxies to the debates. His absence has however been justified by a few who note that Buhari’s absence dictates his absence.

If Buhari refuses to attend the presidential debate, then @atiku should also boycott that debate. It will be an insult for atiku to stand on the podium with Osinbajo or any other buhari representative to debate. Buhari MUST debate or they should forget about it. Lazy president https://t.co/5pEZeznI6E

Other presidential candidates present at the event took jabs at the president for his failure to show up for the debate, and other debates.