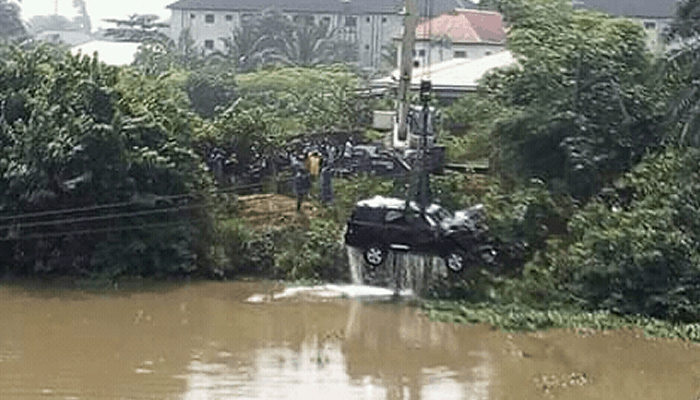 Two vehicles which plunged into Ekpan River near Cheron Nigeria Limited around the NPA Expressway in Uvwie Local Government Area has lead to the death of at least eight people in Delta State.

According to Punch, the accident happened when a Sports Utility Vehicle ran into a commercial mini-bus that just dropped passengers along the expressway.

Further report revealed the vehicle involve in the accident were coming from Warri and heading towards Effurun roundabout when the incident happened and the vehicles were both carrying passengers.

Although, some witnesses claimed that only the SUV that plunged into the river, others said both vehicles plunged with about 10 passengers on board.

One of the sources said, “The bus was picking and dropping passengers near Chevron office just by the Ekpan River when the Jeep (SUV) on speed rammed into the small bus and both vehicles fell into the river. Eight bodies were recovered lifeless.

“The incident occurred about 11:30am. I can’t tell about the number of persons that were in both vehicles but eight persons recovered by divers. It took the intervention of sympathisers and the police officers from Ekpan Division to recover the corpses and evacuate the vehicles.”

A police source at the Ekpan Police Station confirmed the incident and the corpses of the deceased had also been evacuated.