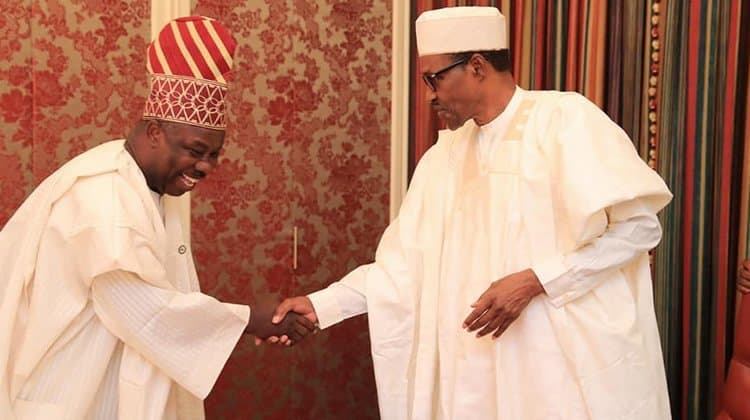 While the All Progressives Congress, Adams Oshiomhole, threatened to expel  him from the ruling party,  Governor of Ogun State, Ibikunle Amosun returned to the Presidential Villa, Abuja

Amosun visited the President in company with the National Chairman of the Allied Peoples Movement, Alhaji Yusuf Dantalle.

This time round, Amosun’s mission was to formally present a letter from the APM to Buhari, adopting him as the party’s presidential candidate.

Recall that there has been a rife between Amosun and the APC at the national levels over the choice of a candidate other than his, as the party’s governorship ticket holder for the 2019 polls.

The governor’s preferred candidate and member of the House of Representatives, Mr. Adekunle Akinlade, has since defected from the APC to the APM as the latter’s governorship candidate, Naija News reports.

A number of Amosun’s loyalists and aides had also dumped the APC, though the governor still holds on to his own APC membership card.

Speaking with State House correspondents after emerging from the meeting with Buhari, Amosun said he merely kept a promise he earlier made to bring the adoption letter to the President personally.

The governor said, “You will recall that just last week, we made public that the APM had adopted President Buhari as the presidential candidate.

“I had promised to bring the letter they (APM) had given me to present to him and that is what we came to do today. And you know Mr. President is a very gracious human being; he is a man with a good heart.

“He said if a party has adopted him, it is only fair he acknowledges the party and the chairman. That is why we are here.

“I have said that anybody that is for President Muhammadu Buhari is for me. We will embrace such a party, such persons, such an organisation wholeheartedly, and that is what I am doing and that is what we are doing in Ogun State.

“Clearly, Mr. President will have massive votes in Ogun State in the coming election.”

When he was asked to react to Oshiomhole’s expulsion threats, Amosun said his mission to the Villa was not to discuss Oshiomhole.

He said, “I don’t want to comment on that. We came for this (adoption letter). Let us restrict ourselves to this. I want my President to win. What else do you want? We must win, that is it!”

Also speaking, Yusuf- Dantalle claimed that the APM took the decision to adopt Buhari because the party members believed in him to continue to lead the country.

“Personally, I believe in him and the reason being that I love my country and I don’t have any other country apart from Nigeria. And Buhari is the only man with the sincerity of intent to take Nigeria to the next level.

“This is not the Nigeria I was born into but I see that Nigeria is coming back only through Buhari,” he said