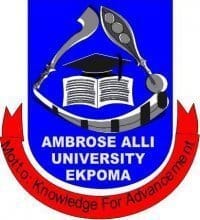 Six final year students of the Edo State own university, the Ambrose Alli University, Ekpoma, and three other persons have lost their lives at a graduation party.

Report has it that Ihimudun road, Ekpoma in Esan West local government was the venue of the party.

The Nation reports that the six students who dead at the party had just concluded their final year paper, while the other three were ex-students of the institution who were invited for the party.

A source in the local government said the dead were four males and one female while two others were critically injured.

A medical student and son of a Local council chairman identified as Dr. Chibudum Eistein was also deceased.

Naija News understands that a student who was aggrieved over the lost of his girlfriend had shot dead the victims while the party was going on.

It was gathered that the suspect angrily walked out of the party after his shirt got torn but returned with his friends and shot nine persons dead.

A Professor in the university who pleaded anonymity confirmed the incident but said it happened outside the campus.

The Professor said they were yet to get full details of what actually transpired.

The school authority and the Edo State Police Command has kept mute concerning the incident, as they have refused to comment.