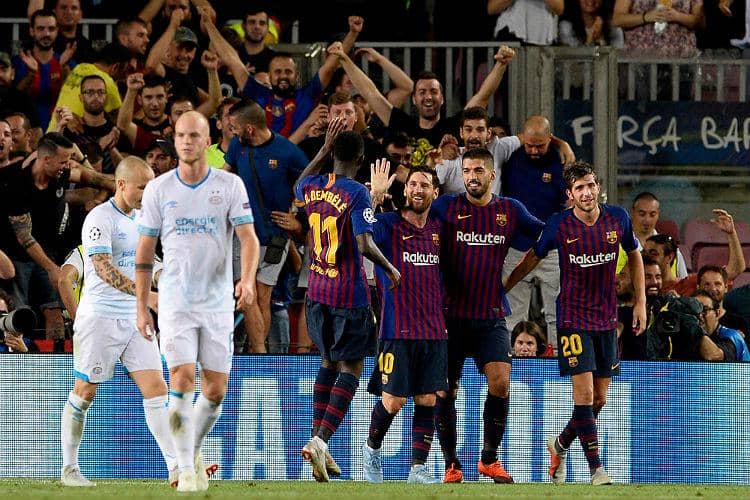 A Lionel Messi show. Thus can be defined the debut of Barcelona in the Champions League. Playing at home in the Camp Nou on Tuesday, the team led by Ernesto Valverde had no problem to beat PSV 4-0. The Argentine star left his mark three times. Dembelé, completed the rout.

Phillipe Coutinho was on the pitch as a starter, and once again had a good performance alongside Messi, Suarez and Dembelé. However, with the expulsion of the defender Umtiti, was the sacrificed, and ended up being replaced already in the final stretch of the confrontation. Arthur, newcomer to the Guild, entered the final minutes.

The Catalan team returns to the pitch next Sunday at 15:45 (GMT), for the Spanish Championship, against Girona, at home. The Dutch will have a classic against Ajax.

Barça dominates and leaves in front with Messi

In the first minutes, Barca sought to create the games. At 10 minutes, came the first sharper. Messi tabulated with Coutinho, who gave to Suárez. The Uruguayan raised in the area and the shirt 7 appeared to deflect head, but the ball went through the bottom line.

Retracted, the Dutch team explored the counterattacks, and almost opened the scoring three minutes later. Bergwjin came in from the left and struck a dangerous cross, but the ball came to the left of Ter Stegen.

However, the defense were on their toes and allowed no space for a finish. And so, Barcelona opened the scoring. After 32 minutes, Messi struck a free-kick for Zoet, with no chance for the keeper.

The goal gave tranquility to Ernesto Valverde, who managed very well the score, without taking risks, until the final whistle of the first stage.

In the complementary stage, the Barça continued with the control of the game. Messi almost zoomed in, receiving, spinning and kicking, but Zoet defended. Virtually in the sequence, Suárez charged from the right, entered the area and crossed. The ball passed until finding Coutinho, who caught the ball badly, sending over.

It only gave Barcelona in the game, literally. At 12 minutes, another attempt by Philippe Coutinho. The Brazilian received on the left side, pedaled and hit the cross, Zoet stretched all to avoid the attempt.

Even dominating all the actions, the risk of taking a goal existed, and almost the PSV came to the draw. Bergwjin received on the left and rolled back looking for De Jong, who kicked the goal, but the ball was with Ter Stegen. Lozano, had two more attempts, but ended up wasting.

At 22, the Catalans almost made the second. Messi tabulated with Coutinho, who played for Suárez. When trying to return in the Brazilian, the ball was clean left for the Uruguayan, who sent the goal, and ended up hitting the crossbar.

Eight minutes later, it was late, but Barcelona’s second goal came. Dembel got off the mark with a beautiful twist, loaded and kicked with his right leg, enlarging the score at the Camp Nou, and practically defining the match. Two minutes later, Rakitic served Messi, who scored another, leaving the score in 3 to 0.

However, defender Umtiti was sent off after a hard foul at Lozano. As we already had the yellow, went to the shower early. However, it would still be time for another Messi goal. At 42 minutes, Suárez gave a beautiful pass for the Argentine to hit with his right leg and make the third attempt in the confrontation.